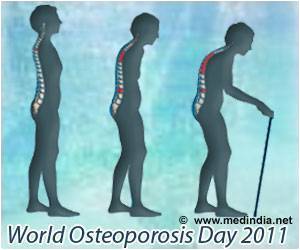 UC Davis Health System scientists led research team has built a novel technique to enhance bone growth by using a molecule. When it is injected into the bloodstream, it directs the body's stem cells to travel to the surface of bones. Once these cells are guided to the bone surface by this molecule, the stem cells differentiate into bone-forming cells and synthesize proteins to enhance bone growth. The study, which was published online today in Nature Medicine, used a mouse model of osteoporosis to demonstrate a unique treatment approach that increases bone density and prevents bone loss associated with aging and estrogen deficiency.

"There are many stem cells, even in elderly people, but they do not readily migrate to bone," said Wei Yao, the principal investigator and lead author of the study. "Finding a molecule that attaches to stem cells and guides them to the targets we need is a real breakthrough."

Researchers are exploring stem cells as possible treatments for a wide variety of conditions and injuries, ranging from peripheral artery disease and macular degeneration to blood disorders, skin wounds and diseased organs. Directing stem cells to travel and adhere to the surface of bone for bone formation has been among the elusive goals in regenerative medicine.


The researchers made use of a unique hybrid molecule, LLP2A-alendronate, developed by a research team led by Kit Lam, professor and chair of the UC Davis Department of Biochemistry and Molecular Medicine. The researchers' hybrid molecule consists of two parts: the LLP2A part that attaches to mesenchymal stem cells in the bone marrow, and a second part that consists of the bone-homing drug alendronate. After the hybrid molecule was injected into the bloodstream, it picked up mesenchymal stem cells in the bone marrow and directed those cells to the surfaces of bone, where the stem cells carried out their natural bone-formation and repair functions.

Encyclopedia section of medindia briefly explains about Lifestyle and Osteoporosis
Advertisement
"Our study confirms that stem-cell-binding molecules can be exploited to direct stem cells to therapeutic sites inside an animal," said Lam, who also is an author of the article. "It represents a very important step in making this type of stem cell therapy a reality."

Twelve weeks after the hybrid molecule was injected into mice, bone mass in the femur (thigh bone) and vertebrae (in the spine) increased and bone strength improved compared to control mice who did not receive the hybrid molecule. Treated mice that were normally of an age when bone loss would occur also had improved bone formation, as did those that were models for menopause.

Alendronate, also known by the brand name Fosamax, is commonly taken by women with osteoporosis to reduce the risk of fracture. The research team incorporated alendronate into the hybrid molecules because once in the bloodstream, it goes directly to the bone surface, where it slows the rate of bone breakdown. According to Nancy Lane, a co-investigator on the study and director of the UC Davis Musculoskeletal Diseases of Aging Research Group, the dose of alendronate in the hybrid compound was low and unlikely to have inhibited the compound's therapeutic effect.

"For the first time, we may have potentially found a way to direct a person's own stem cells to the bone surface where they can regenerate bone," said Lane, who is an Endowed Professor of Medicine and Rheumatology and an expert on osteoporosis. "This technique could become a revolutionary new therapy for osteoporosis as well as for other conditions that require new bone formation."

Osteoporosis is a major public health problem for 44 million Americans. One in two women will suffer a fracture due to osteoporosis in their lifetime. Although effective medications are available to help prevent fracture risk, including alendronate, their use is limited by potential harmful effects of long-term use.

The major causes for osteoporosis in women include estrogen deficiency, aging and steroid excess from treatment of chronic inflammatory conditions such as rheumatoid arthritis. Generally, the osteoporosis generated by these metabolic conditions results from change in the bone remodeling cycle that weakens the bone's architecture and increases fracture risk.

The authors noted that the potential use of this stem cell therapy is not limited to treating osteoporosis. They said it may prove invaluable for other disorders and conditions that could benefit from enhanced bone rebuilding, such as bone fractures, bone infections or cancer treatments.

"These results are very promising for translating into human therapy," said Jan Nolta, professor of internal medicine, an author of the study and director of the UC Davis Institute for Regenerative Cures. "We have shown this potential therapy is effective in rodents, and our goal now is to move it into clinical trials."

Funding for the study came from the Endowment on Healthy Aging and the National Institutes of Health. The California Institute for Regenerative Medicine has given the team a planning grant to develop a proposal for human clinical trials.

"This research was a collaboration of stem cell biologists, biochemists, translational scientists, a bone biologist and clinicians," said Lane. "It was a truly fruitful team effort with remarkable results."

The risk of suffering from osteoporotic fractures is 30-50% in women and 15 to 30% in men. Osteoporosis screening is currently recommended for women only.
Advertisement
<< Never Skip Your Breakfast
User Friendly Blood Thinners Expected to Substitute Coumadin >>

How Often Should Testing for Osteoporosis Be Done?