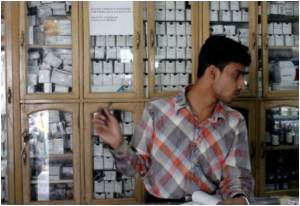 Drug Controller General of India (DCGI) has banned popular medicines, declaring them 'unsafe' after an investigation by the Union Health Ministry's Drugs Technical Advisory Board (DTAB).

These are medicines that contain Nimesulide (a suspension to treat pain and fever in children), Cisapride (for treating stomach acid) and Phenylpropanolamine (a component of popular cold and cough syrups).  They include popular brands like Vicks Action 500 and D'Cold.

Mitam Barooah, emergency medicine consultant, NHS Foundation Trust, Birmingham states, "Most of these banned drugs which anyone can buy from a pharmacy without any valid prescription are in high demand. The orders are out in Delhi but with no medical awareness among customers and even sometimes doctors, most people remain ignorant."


Assam reports a complete ignorance of this ban and people continue to treat themselves with over-the-counter drugs, and pharmacists continue to sell them.  "We may be highly educated but most of us are medically illiterate. If some drugs are banned, we won't know about it till a doctor points it out," was the comment of a local resident. Barooah expressed the need for Assam to have a Medicine Regulatory Board  to bring these developments into public awareness.

Over-the-counter (OTC) drugs can be bought without a prescription. OTC allergy medications are for the allergy sufferer to choose the right over-the-counter drugs.
Advertisement
The banned drugs constitute Rs 20 crore of India's Rs 50,000-crore pharma market. Drug manufactures had stopped making Nimesulide medicines, which had serious side-effects affecting the liver, after they were banned in Britain, Canada, Sweden, Denmark, Australia, New Zealand and Japan.

Clinical trials are experiments that yield useful information to clinicians if a particular treatment is of any value to a patient.
Advertisement
Advertisement