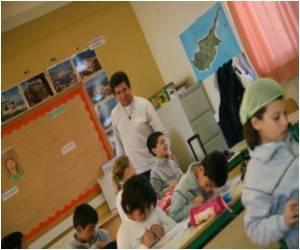 Researchers report that children who are physically fit have faster and more robust neuro-electrical brain responses during reading than their less-fit peers.

These differences correspond with better language skills in the children who are more fit, and occur whether they're reading straightforward sentences or sentences that contain errors of grammar or syntax.

The new findings, reported in the journal Brain and Cognition, do not prove that higher fitness directly influences the changes seen in the electrical activity of the brain, the researchers say, but offer a potential mechanism to explain why fitness correlates so closely with better cognitive performance on a variety of tasks.


"All we know is there is something different about higher and lower fit kids," said University of Illinois kinesiology and community health professor Charles Hillman, who led the research with graduate student Mark Scudder and psychology professor Kara Federmeier. "Now whether that difference is caused by fitness or maybe some third variable that (affects) both fitness and language processing, we don't know yet."
Advertisement
The researchers used electroencephalography (EEG), placing an electrode cap on the scalp to capture some of the electrical impulses associated with brain activity. The squiggly readouts from the electrodes look like seismic readings captured during an earthquake, and characteristic wave patterns are associated with different tasks.

These patterns are called "event-related potentials" (ERPs), and vary according to the person being evaluated and the nature of the stimulus, Scudder said.

For example, if you hear or read a word in a sentence that makes sense ("You wear shoes on your feet"), the component of the brain waveform known as the N400 is less pronounced than if you read a sentence in which the word no longer makes sense ("At school we sing shoes and dance," for example), Scudder said.

New Insights into How Toddlers can Improve Language Skills
Parents can help improve their toddlers' language skills by showing them examples of different ......

First Language Learnt Determines Brain Anatomy Differences Between Deaf And Hearing
Researchers have found that the language we learn as children affects brain structure, as does ......

Stuttering
Stuttering, stammering or disfluency is a speech disorder that can hamper communication and affect a...