Patient Discharged After Having an Iron Rod Pierce His Head 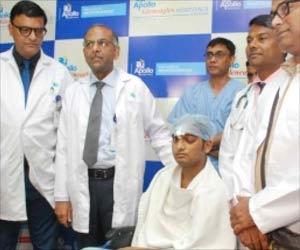 A 24year old Kolkata youth narrowly escaped the clutches of death after a 3.5-feet-long iron rod pierced his head in an accident on Tuesday. Doctors were miraculously able to remove the iron rod from his head with minimum bleeding.

M. Taraque was released from the Apollo Gleneagles hospital during the day, a month after the critical brain surgery, said to be unprecedented in eastern India.

Advertisement
‘A Kolkata youth has managed to escape his death very narrowly after having an iron rod pierced his head. After the accident had occurred, the patient was rushed to the hospital with the iron rod still intact. This alone saved his life explained the doctors as an attempt to remove the rod could have led to a major bleed right then and there.’

"Taraque suffered a massive car accident on April 28 in which a 3.5 ft long iron rod of the roadside divider broke and went through his forehead leaving him profusely bleeding and with very little life expectancy when he was brought to the hospital," said Binod Kumar Singhania, Consultant Neuro Surgeon at the hospital.


The doctor revealed they had to get on with the surgery without much prior knowledge about the extent of the patient's brain damage as it was difficult to conduct a CT scan with such a big piece of metal stuck in his head.
Advertisement
They eventually removed the rod through a unique endoscopic process with proper hemostasis - a process which causes bleeding to stop.

"The case was extremely tricky as the biggest challenge was to minimize the bleeding inside the skull after removing the metal rod. As the brain remains enclosed inside the skull, too much bleeding could have damaged a large number of brain cells that may have led to the patient's death," the doctor said.

Singhania admitted that he hasn't performed such an operation in his 30-year-long career as a neurosurgeon.

"The operation was successful, and it was found that the patient did not suffer any major vessel damage in the accident. He is currently stable. However, there is a problem with the movements of his speech and the right side limbs, which would need post-operative care like physiotherapy and speech therapy," he said.

Another doctor in the hospital lauded the success of the operation as a "miracle" and stressed that such accident victims should be immediately transferred to a specialized medical care without any attempt to remove the rod.

"It is a miraculous success as most patients with such injuries can't be saved. It is important that he was immediately brought to the hospital and no attempts were made to remove the rod from his skull.

"Otherwise, the situation would have been fatal as the patient would have profusely bled from the wound," added Suresh Ramasubban, senior consultant of pulmonary critical care department in the hospital.

Helmet Use Reduces Risk of Cervical Spine Injury During Motorcycle Accidents
Wearing a helmet is a reasonable way to limit the risk of injury to the cervical spine in a ......

New Laser Technology Can Prevent Accidents on Icy Roads
Number of accidents can be reduced with Raman detectors, which are fitted with lasers beneath the .....

Elderly Drivers Who Fall are at Greater Risk for Car Accidents
Falls, which are a common and preventable cause of injury among older adults. Falls were related .....