Only 15% of Hemophilia Patients are Diagnosed in India

Hemophilia is a genetic and life-threatening bleeding disorder. Even with a minor injury or cut, the blood of hemophilia patients does not clot normally due to the absence of clotting proteins called factors. If care is not taken, recurrent and prolonged bleeding into joints and muscles can lead to permanent disability and bleeding from sensitive organs can even lead to death.


"The burden of hemophilia lies undiagnosed to a great extent. There are about 16,000 registered patients in the country as of now, others remain undiagnosed," said Kanjaksha Ghosh, president of the Hemophilia Federation of India.


‘Only 15% of people in India suffering from hemophilia - genetic and life-threatening blood disorder - have been identified while the remaining still lay undiagnosed.’


According to a study by the World Federation of Hemophilia (annual global survey), almost half of the world's hemophilia population lives in India and almost 70% of people with hemophilia do not have adequate knowledge or access to treatment.

About management of the disease, Alok Srivastava, professor in the department of hematology at Christian Medical College, Vellore, said, "In Delhi, there are 2,000 registered patients suffering from hemophilia. Delhi is also witnessing cases coming from other states as they do not have basic facilities and management care in their region."

He said, "Efforts were being taken to build more hemophilia care centers which would create effective mechanism for diagnosis, treatment and bringing timely comprehensive care for hemophiliacs within their reach. We are committed to provide accessible treatment and provide state-of-the-art facilities for patients."

The experts were speaking at an event organized to mark World Hemophilia Day, inaugurated by BJP parliamentarian Meenakshi Lekhi. 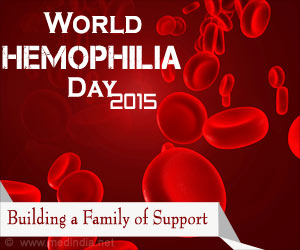 World Hemophilia Day: Three-Day Summer Camp for People With Hemophilia at Manipal
Hemophilia is an inherited blood disorder and has no permanent cure. Patients depend on anti-hemophilia factors, which costs about Rs.3 lakh per year.
READ MORE