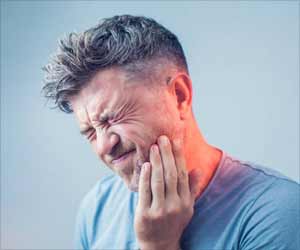 New study moves one step forward in curing osteonecrosis of the jaw which is a painful jaw disease caused by drugs commonly used to prevent bone loss.

USC researchers and collaborators report a breakthrough to prevent damage to the jaw, a side effect suffered by some people undergoing treatment for cancer or osteoporosis.

It is well-known that osteonecrosis of the jaw (ONJ) is a debilitating bone condition that affects the jaws and occurs as a result of reduced local blood supply
Advertisement
‘Bisphosphonates (BPs) drugs commonly prescribed for metastatic bone cancer patients and to maintain bone density in osteoporosis patients sometimes have a terrible side effect causing necrosis in the jaw.’
Tweet it Now

The newly published research is an important step toward a cure for osteonecrosis of the jaw, which is a rare side effect caused by drugs commonly used to combat bone loss. It causes severe and persistent inflammation leading to loss of bone from the jaw and has no effective prevention or cure. The risk, though small, deters people from taking drugs needed to fight bone cancer or prevent fractures due to loss of bone density.


USC scientist Charles McKenna said the successful animal experiment, conducted by researchers at USC and UCLA, raises hope that physicians could adapt the new method to treat the condition in people.

Bisphosphonates were prescribed more for older and risky women with osteoporosis compared to the younger, healthier women with osteopenia.
Advertisement
"This is a condition that has been excruciatingly painful and difficult to treat for more than a decade," said McKenna, a professor of chemistry in the USC Dornsife College of Letters, Arts and Sciences and adjunct professor of pharmacology and pharmaceutical sciences in the USC School of Pharmacy. "We think our new approach may provide hope for the future," he said.

The new published findings appear in Bone. The authors are affiliated with the USC Center for Drug Discovery and Development at the Michelson Center for Convergent Bioscience, the UCLA School of Dentistry and a Pasadena-based startup biotech company, BioVinc LLC.

For years, physicians have prescribed a class of drugs called bisphosphonates (BPs) for metastatic bone cancer patients and to maintain bone density in osteoporosis patients. BPs include a range of compounds that share a remarkable ability to stick to the bone like Velcro.

But when used in high doses in the cancer clinic, BP drugs sometimes have a terrible side effect causing necrosis in the jaw. The problem often occurs after a tooth is removed, the gap doesn't heal, and the jaw begins to deteriorate.

Although the condition is very rare at the lower BP doses used to combat osteoporosis, many patients are avoiding the drugs altogether for fear of the side effects. The risk is low as the National Osteoporosis Foundation estimates the incidence of osteonecrosis of the jaw due to BP used to treat osteoporosis to be between 1 in 10,000 and 1 in 100,000 people annually. Risk has been estimated to be much higher, about 3 percent of patients, at the BP dose used to treat cancer, McKennna said.

Nonetheless, more and more osteoporosis patients are willing to take their chances with the disease rather than risk the side effects. Surveys have shown the recent trend in reduced hip fractures among post-menopausal women may be reversing due to BP drug aversion.

"The fear factor of this condition has led to severe underuse of bisphosphonates for osteoporosis so much so that we're seeing a rise in hip fractures in elderly people, aversion to bisphosphonates in oncology clinics and liability concerns in the dental office," McKenna said.

To solve the problem, McKennna devised an elegant solution. The research team used a different BP compound, an inactive compound that could be used locally in the mouth to push the BP drug from the jawbone while leaving undisturbed the useful drug in the rest of the skeleton.

Said McKenna: "Think of it as a way to fight fire with fire."

The scientists involved in the study used mice to test different BPs attached to fluorescent dyes. One color label coded the BP zoledronate, which is administered systemically to treat osteoporosis and cancer, while a different color labeled 'rescue BP' coded a BP compound with similar bone affinity, but no biological activity. The researchers discovered that rescue BP injected into the jaw removed most of the BP drug causing the jaw bone tissue damage, clearing the way for the animal's natural healing process to repair the extraction site.

The new technique isn't ready for clinical use in humans yet. McKenna said BioVinc, which provided funding for the study via a National Institutes of Health small business research grant, will be responsible for advancing the treatment to commercial clinical use. Several of the authors of the study disclose a financial interest in BioVinc, a company specializing in "bone-targeted therapeutics and diagnostics." McKenna is the company's academic founder.

Bisphosphonates are effective at suppressing the elevated bone turnover and bone pain that are characteristic of Paget's disease of bone.
Advertisement

Osteitis deformans, or Pagets disease of the bone, is the deformity of the bone. Symptoms include severe bone ...
This site uses cookies to deliver our services.By using our site, you acknowledge that you have read and understand our Cookie Policy, Privacy Policy, and our Terms of Use  Ok, Got it. Close
×