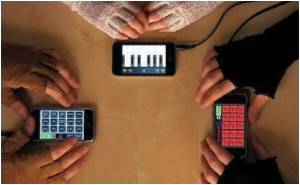 Singles looking for a mate can now search for their dream partner just with the touch of a button on their iPhone or Blackberry.

A new app, called Grindr, uses GPS technology to allow anyone with a smartphone to pinpoint potential opportunities for romance as they pass by on the street.

Frustrated Aussie workers are now using their iPhones to vent out anger at their bosses, thanks to applications that allow them to snap and mutilate a photo of their subject.
Advertisement

The programme has been available for the gay community for some time, and gay icon Stephen Fry told 'Top Gear' very straight man Jeremy Clarkson about the relative merits when he appeared on the show.


Men around the UK turned to Grindr and downloads rocketed.

It told them how far away they were standing in feet - and perhaps even inches - from like-minded inquisitive Grindrs. Pixellated images offer a grid of potential partners, reports Sky News.

Joggers in Central Park, New York can now order food via their iPhones, thanks to a new application called 'CityMint'.
Advertisement
And if you have any doubts for its success in the heterosexual world, then Joel Simkhai, the founder of Grindr-Guy Finder- assures that it certainly does.

Walking into a room full of strangers and striking up a conversation with a potential suitor only to be introduced a few minutes later to their loving partner could soon be passe.

Instead, taking a few moments to click on to Grindr, or the heterosexual equivalent, and calling up who else in the room is single and keen not to be, at least for the evening, could save on lip service and inappropriate lust.

It is certainly a huge help in terms of meeting people instantly whether in a bar or a boardroom.

But the gay community have found a Grindr encounter almost always ends up in the bedroom.

A new iPhone application may really interest celeb-loving people as it helps the keep abreast with the lives of their favourite stars.
Advertisement
<< Sugar Really Does Make Us Sweeter
Trusting Others Helps You Detect Lies Better >>

New IPhone App To Show You Your Post-Boob Job Makeover

Find a Hospital Noscaphene (Noscapine) Sanatogen Post-Nasal Drip How to Reduce School Bag Weight - Simple Tips Nutam (400mg) (Piracetam) Selfie Addiction Calculator A-Z Drug Brands in India Accident and Trauma Care Indian Medical Journals
This site uses cookies to deliver our services. By using our site, you acknowledge that you have read and understand our Cookie Policy, Privacy Policy, and our Terms of Use