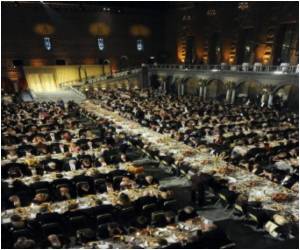 The Nobel Medicine Prize winner will be named today, kicking off a week of prestigious award announcements including the two that are most watched, Literature and Peace.

Speculation is as always rife for those honours, to be announced on Thursday and Friday respectively, with many predicting a poet will grab the literature award, and some saying a Chinese dissident will follow last year's jaw-dropping surprise pick of US President Barack Obama for the Peace Prize.

The Nobel Prize No Longer A Male Bastion

First up though is the Medicine Prize, with the laureate to be revealed on today around 11:30 am (0930 GMT) by the Nobel jury at Stockholm's Karolinska Institute.


The award committees for the various prizes never reveal the nominees, leaving the door wide open for frenzied speculation in the weeks prior to the announcements.

Internet in the Fray for Nobel Peace Prize

The World Wide Web has been nominated among a record 237 individuals and organisations in the run for this year's Nobel Peace Prize.
Advertisement
One name that has circulated among observers for the Medicine Prize is Austrian-born American chemist Carl Djerassi, one of the inventors of the female contraceptive pill, which this year is celebrating its 50th year on the market.

The announcement of the Physics Prize laureates will be made on Tuesday, with Spanish physicist Juan Ignacio Cirac Sasturain and his Austrian colleague Peter Zoller standing out from the pre-Nobel buzz for their work on quantum computers, the megacomputers of the future.

The Chemistry Prize will follow on Wednesday, with Swiss photochemist Michael Graetzel figuring among the believed front-runners for his discovery of a new type of solar cell made of low-cost materials and easy to manufacture.

The winner of the Literature Prize will be disclosed on Thursday, and literary circles have suggested it could go to a poet for the first time since 1996.

A woman writer from Africa is also seen as a good bet, sparking speculation that Algerian poet Assia Djebar could win.

Last year, Germany's Herta Mueller took the honour for her work inspired by life under Nicolae Ceausescu's dictatorship in Romania.

Speculation has been especially rampant around the the Peace Prize, to be revealed on Friday and the only Nobel prize to be announced in Oslo, after Obama's surprise win last year.

The fact that he won the prize after less than a year in office and as the United States was waging wars in both Iraq and Afghanistan sparked wide criticism of the Norwegian Nobel Committee.

Some observers therefore expect a less controversial figure to win this year, but others say the committee could just as easily create another upset by picking a Chinese dissident, which would certainly infuriate Beijing.

Several Chinese dissidents are known to be on the list, but jailed Liu Xiaobo is seen as the most likely choice.

The Economics Prize will wrap up the Nobel season on Monday, October 11.

This year's laureates will receive 10 million Swedish kronor (1.49 million dollars, 1.09 million euros) which can be split between up to three winners per prize.

The Peace Prize will be handed out in Oslo on December 10, the anniversary of the death of Swedish industrialist Alfred Nobel, who founded the prizes.

Other Nobel laureates will pick up their prizes in Stockholm on the same day.

The Discussion That Followed After the Nobel Peace Prize

Throughout its more than 100-year history the Norwegian Nobel Committee has been no stranger to controversy, as this year with its attribution of the Nobel Peace Prize to US President Barack Obama.
Advertisement
Advertisement