A Right to Marry: Saudi Women Fight for Control of Marital Fate 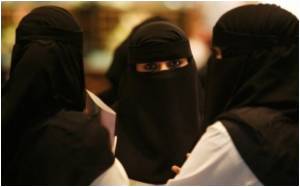 Women in Saudi Arabia are fighting back against tribal traditions that make them hostage to the whims of their fathers and male guardians who alone can decide who their future husbands will be.

Faced with a lifetime of being forced to remain single, an increasing number of Saudi women, many of them university graduates with good jobs, are going to court to dispute their fathers' refusal to sign off on their marriages.


In July, a Medina court rejected a 42-year-old doctor's petition to override her father and brothers' refusal to allow her marriage to a surgeon she works with, because he did not belong to their tribe.


The court ruled that the father was justified, and that she was not being obedient by trying to marry someone outside the clan.

"Unfortunately we have a strange paradox in society, where young girls only 10 years old can be married, but an adult woman can be prevented from marrying for illogical reasons," Suhaila Zainal Abidin of the National Society for Human Rights told AFP.

"We want to eliminate this phenomenon of ignorance," said Saleh who has a Facebook campaign supporting Saudi women's marriage rights.

"In pre-Islamic times they would just kill an unwanted daughter. Now it is killing her as an adult," she said.

Islamic teachings say that a father must agree to his daughter's marriage if the potential husband is moral and a devout Muslim.

But in Saudi Arabia, a blend of Islamic sharia law and deeply conservative tribal traditions gives men absolute control over their daughters until they wed.

The result is that government officials and judges will not allow a woman to marry without the permission of her official male guardian -- her father, or a brother or uncle if the father is dead.

The most common reason is the tribal issue: the fathers insist their daughters marry someone inside their clan, the key social fabric of the kingdom from which derives significant political and economic power.

"There are fathers who themselves married outside their tribe, who at the same time deprive their daughters from marrying outside!" said Abidin.

Sometimes a daughter is not allowed to marry a man she likes on the basis of having been pledged since childhood to someone else, perhaps a cousin.

Some women must remain single until an older sister gets married first, while others are forced by their fathers to remain unmarried to ensure that any income they earn from working or social welfare stays at home.

Maha, a woman AFP contacted via email, is a typical case.

When she was 26, she turned down a marriage from inside her tribe set up by relatives and a matchmaker because she considered the husband-to-be "not qualified."

Since then, family members have found her other candidates for matrimony from outside the tribe, but her father and brothers turned each one down.

"My father and my brothers have continuously refused, and now, after reaching 38, they are pushing me to marry a man of 42 who is addicted to hashish," said Maha, who asked that her surname not be published.

In the past six years 86 women have resorted to the courts to enable them to marry after being refused permission by their male guardian, including 13 cases in 2010, according to the country's National Society for Human Rights.

But this is just the tip of the iceberg, because most such victims suffer in silence rather than challenge their own families.

The reasons for the problem vary from town to town and tribe to tribe, said Saleh, and include objections to marriages between members of different tribes, members of tribes and townspeople, and people from different regions.

"But the main reason is the prevailing ignorance of religious teachings in society," she said.

She pointed to a fatwa from the prominent Saudi Sheikh Abdullah bin Jibreen, who died last year, who had ruled that fathers cannot prevent their daughters from marrying.

"All we want is the application of this fatwa," Saleh said.

She said that at the least, the country should have rules to oblige a father or male guardian to approve a marriage after the woman reaches the age of 35.

Aziza, a university professor, said her father flatly denied her permission to marry anyone at all.

"My father refused me permission to marry on the grounds that there is no one worthy of me, and I respected his wish," she told AFP.

But after she turned 30, he still denied her permission to marry and blamed his daughter for creating impossible conditions, she said.

"After I got over my shame, I tried to discuss the matter with him directly" but it infuriated him, she said.

He threatened her, locked her in her room and cut her off from her relatives, she said. Aziza said she tried to take her own life several times.

Nora Mohammed said her father kept her at home to reap the benefits from government social welfare payments.

"Many guys sought to marry me when I was in my 20s. But my father, who is dead now, rejected them without reason.

"Now I am 42 without anyone who wants to marry me except those who are twice my age."

Abidin said that the strict Saudi school of sharia jurisprudence needs to open up, to accept principles from other schools that give women more leeway in their marriages.

"Some judges are standing with the fathers," she said. "This is preventing girls from marrying and from becoming mothers as well."

Complaints Over Anti-Impotence Pill Ad in Saudi Arabia
In some unexpected news, an ad for a Viagra-like anti-impotence pill has created public uproar in Saudi Arabia.
READ MORE

Saudi Arabia to Begin Mass Flu Vaccinations as Hajj Nears
Saudi Arabia said Monday it is to vaccinate all its residents attending the hajj against swine flu, pressing ahead with plans to host millions of the world's Muslims despite a heightened
READ MORE