Experts have announced the identification of a signaling pathway that is operational in intra-abdominal fat, the fat depot that is most strongly tied to obesity-related morbidity.

"Fat tissue in obesity is dysfunctional, yet, the processes that cause fat tissue to malfunction are poorly understood-specifically, it is unknown how fat cells 'translate' stresses in obesity into dysfunction," said Dr. Assaf Rudich, senior lecturer from the Department of Clinical Biochemistry at Ben-Gurion University.


Fat tissue is no longer considered simply a storage place for excess calories, but in fact is an active tissue that secretes multiple compounds, thereby communicating with other tissues, including the liver, muscles, pancreas and the brain.


Normal communication is needed for optimal metabolism and weight regulation, but in obesity, fat (adipose) tissue becomes dysfunctional, and mis-communicates with the other tissues.

According to the researchers of Ben-Gurion University of the Negev (BGU) and Germany-based University of Leipzig, this places fat tissue at a central junction in mechanisms leading to common diseases attributed to obesity, like type 2 diabetes and cardiovascular diseases.

The researchers highlight the fact that fat tissue dysfunction is believed to be caused by obesity-induced fat tissue stress: Cells over-grow as they store increasing amounts of fat. They say that this excessive cell growth may cause decreased oxygen delivery into the tissue; individual cells may die (at least in mouse models), and fat tissue inflammation ensues.

Excess nutrients, they add, may also lead to increased metabolic demands, and cause cellular stress.

The BGU and Leipzig teams collected fat tissue samples from people undergoing abdominal surgery, and identified a signaling pathway that is operational in intra-abdominal fat, the fat depot that is most strongly tied to obesity-related morbidity.

They found that the signaling pathway was more active depending on the amount of fat accumulation in the abdomen, and that it correlated with multiple biochemical markers for increased cardio-metabolic risk.

In their study report, they have revealed that the expression of one of the upstream signaling components, a protein called ASK1, predicts whole-body insulin resistance (an endocrine abnormality that is strongly tied to diabetes and cardiovascular disease), independent of other traditional risk factors.

The researchers have also shown that although non-fat cells within adipose tissue express most of this protein in lean persons, the adipocytes themselves increase its expression by more than four-fold in abdominally-obese persons.

"The importance of this study is not only in contributing to the understanding of adipose tissue dysfunction in obesity, but as a consequence, may provide important leads for novel ways to prevent the dangerous consequences, such as type 2 diabetes, of intra-abdominal fat accumulation," states Dr. Iris Shai, a BGU researcher at the S. Daniel Abraham International Center for Health and Nutrition and Soroka University Medical Center in Beer-Sheva, Israel.

The study has been published in the Endocrine Society's the Journal of Clinical Endocrinology and Metabolism.

Ghrelin Hormone Linked to Accumulation of Abdominal Fat
The ghrelin hormone is well known for its appetite-increasing effects, but what is not so well known is its ability to stimulate the accumulation of abdominal fat as well.
READ MORE

Depression And Abdominal Fat - What's The Connection?
A study has shown that older adults suffering symptoms of depression may accumulate abdominal fat over a five year period.
READ MORE

Teen Pregnancy Increases Overweight Risk: Study
Girls who give birth between the age group of 15 and 19 are more likely to be overweight, with more abdominal fat, regardless of their childhood weight.
READ MORE 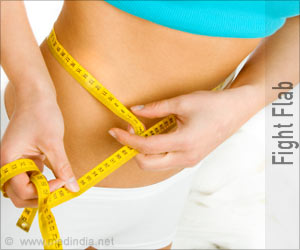