New Microfluidic Platform Could Assess Efficacy of Different Drugs at Once 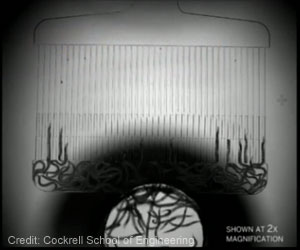 Texas engineers have developed the first large-scale in vivo drug discovery platform using c. Elegans (transparent roundworm). The platform could speed up scientific research and more accurately assess the effectiveness of new drugs in the treatment of neurodegenerative diseases.

Researchers in the Cockrell School of Engineering at The University of Texas at Austin, include Professor Adela Ben-Yakar and her team of postdocs and graduate students -- Sudip Mondal, Evan Hegarty, Christopher Martin, Sertan Kutal Gökçe and Navid Ghorashian -- describe their new platform in a study published in the journal Nature Communications.

The Potential of Large-Scale Genetic Studies for Drug Discovery Discovered

Research shed light on the biology of the disease and provide evidence that large-scale genetic studies can assist in the identification of new drugs for complex disorders such as rheumatoid arthritis.
Advertisement
‘The new platform takes the form of a cellphone-size chip that can immobilize and analyze small animal models using a high-powered microscope. ’

The team believes their platform will allow researchers and pharmaceutical companies to undertake image-based analysis of thousands of live, 1-millimeter-long roundworms, called Caenorhabditis elegans (C. elegans), simultaneously and at the speed and cost of in vitro cell-based platforms.


Ben-Yakar, a researcher in the Departments of Mechanical and Biomedical Engineering, led the design of the new platform, which takes the form of a cellphone-size chip that can immobilize and analyze small animal models using a high-powered microscope. The platform is similar to screening platforms for cells, but it can screen a whole organism made of multiple cells by immobilizing thousands of them inside micro-traps to prevent their natural movement. In addition, the platform can automatically understand data using image analysis software, which was also developed by the researchers. This information can help determine whether a drug is effectively treating a disease in the roundworms.

A transgenic mouse that carries a human gene known to increase risk of Alzheimer's 15-fold was developed by researchers at the University of Illinois at Chicago College of Medicine.
Advertisement
The researchers' microfluidic device is designed to simultaneously image approximately 3,600 roundworms at high resolutions and high speeds, ranging from 12 to 16 minutes. Today's conventional platforms can image only a few animals within such a short time. The device also has the ability to assess the efficacy of many different drug compounds at once. Whereas other microfluidic platforms used today are capable of analyzing only one drug compound at a time, the researchers' new platform can assess 96.

The roundworms, which are desirable in the study of neurodegenerative diseases because they have full nervous systems and a diverse group of neurons, are also the first multicellular organism to have a completely sequenced genome. Approximately one-third of C. elegans' genes are the same as disease-causing genes in humans.

"The C. elegans are thousands of times bigger than cells, so now that we have developed a way to capture and immobilize so many of them so quickly, we can determine much more information about the efficacy of drugs in a whole organism rather than the limited information that is derived when we used isolated individual cells," said Ben-Yakar.

What sets the chip apart from existing platforms is that it is capable of high-throughput screening, the study of thousands to hundreds of thousands of compounds in a rapid and very high-resolution manner, and high-content fluorescence screening, which allows for a faster yet more in-depth analysis of the animals' phenotype.

Made of a flexible polymer, the microfluidic chip contains 96 wells for receiving drug-treated animals. Underneath each well are special microchannels that can trap 40 roundworms. A tapered design squeezes the C. elegans into microchannels in a flat orientation that can be more easily imaged. The microfluidic chip then relies on a gasket system that applies pressure to the chambers to immobilize the roundworms.

"This proof-of-principle study opens the door to using this technology to identify and develop treatments for some of the most intractable human diseases," said Anne Hart, a professor of neuroscience at Brown University who has followed the development of the chip.

To demonstrate the efficiency of their patent-pending device, the team analyzed approximately 1,000 drugs approved by the Food and Drug Administration aimed at treating the protein aggregation found in various neurodegenerative diseases, including Huntington's disease. In doing so, they were surprised to find a potential drug that is particularly effective at treating Huntington's.

"Four of the drugs we tested were effective at treating a protein aggregation model that is directly related to Huntington's, and one of these drugs became even more effective at increased doses without causing toxicity," said Ben-Yakar.

Although the microfluidic device is a prototype, Ben-Yakar's startup company, Newormics, is working to develop a design for a commercial product that could be cheaply and easily manufactured.

Researchers have created in the laboratory dish the cells that make up the blood-brain barrier-the filter that governs what can and cannot come nto contact with the mammalian brain.
Advertisement
<< Triple-Drug Chemotherapy With Topotecan Helps Prevent Second...
Altering the 'Human Flavor' for Mosquitoes Could Help Fight... >>

One of the most important cancer drugs ever discovered by researchers is Taxol®.