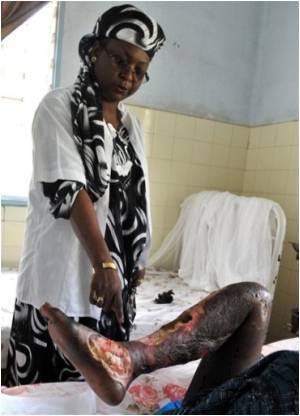 A low cost effective and nanometer sized drug to treat chronic wounds such as diabetic foot ulcers or burns has been developed.

Diabetes is a rapidly growing medical problem affecting close to 3 percent of the world's population. Poor blood circulation arising from diabetes often results in skin wounds which do not heal, causing pain, infection and at times amputation of limbs.

Several proteins, called growth factors, have been found to speed up the healing process, however purifying these growth factor proteins is very expensive, and they do not last long on the injured site.


Now, scientists at the Hebrew University and Harvard involved in the project have used genetic engineering to produce a "robotic" growth factor protein that responds to temperature. Increasing the temperature causes dozens of these proteins to fold together into a nanoparticle that is more than 200 times smaller than a single hair.

Insulin Therapy plays an important role in treating diabetes.Learning about insulin injections can help you better manage your diabetes condition.
Advertisement
This behavior greatly simplifies protein purification, making it very inexpensive to produce. It also enables the growth factor to be confined and to remain at the burn or wound site. The scientists refer to their discovery as robotic, since just as robots are machines that respond to their environment by carrying out a specific activity, so too this protein they have developed responds and reacts to heat.

The experimental drug, which ha been developed by the research group as a topical ointment, has been patented and thus far has been used to treat chronic wounds in diabetic mice, dramatically increasing the healing rate. The goal is to proceed to human clinical trials at some future date after future tests and refinements.

Diabetes has replaced every other condition to become the fastest growing lifestyle disease, globally. This disease also impacts children. Some people are more inclined to develop diabetes than others. Do you belong to the high- risk group? Spend 5 minutes to find out.
Advertisement
<< Golf Funds Charity
Steps to Reduce the Impact of Alcohol in Canada >>

Drug Interaction Checker Selfie Addiction Calculator The Essence of Yoga Hearing Loss Calculator Diaphragmatic Hernia Iron Intake Calculator Pregnancy Confirmation Calculator Find a Doctor Sinopril (2mg) (Lacidipine) A-Z Drug Brands in India
This site uses cookies to deliver our services. By using our site, you acknowledge that you have read and understand our Cookie Policy, Privacy Policy, and our Terms of Use