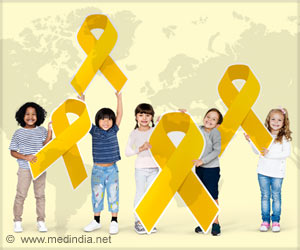 There are almost 400,000 new cases of childhood cancer every year; however, the current records count only 200,000, reveals a modeling study published in The Lancet Oncology. The global estimates show nearly half of the childhood cancer cases are left undiagnosed or untreated.

The new model makes predictions for 200 countries and estimates that undiagnosed cases could account for more than half of the total in Africa, South Central Asia and the Pacific Islands. In contrast, in North America and Europe only three per cent of cases remain undiagnosed. If no improvements are made, the study authors estimate that nearly three million further cases will be missed between 2015 and 2030.
Advertisement
‘The studys findings will help guide new policies in health systems to improve the diagnosis and management of childhood cancers.’

"Our model suggests that nearly one in two children with cancer are never diagnosed and may die untreated," says study author Zachary Ward from the Harvard T.H. Chan School of Public Health, USA. "Accurate estimates of childhood cancer incidence are critical for policy makers to help them set healthcare priorities and to plan for effective diagnosis and treatment of all children with cancer. While under-diagnosis has been acknowledged as a problem, this model provides specific estimates that have been lacking."


Previous estimates for the total incidence of global childhood cancer have been based on data from cancer registries, which identify cases in defined populations. However, 60% of countries worldwide do not have such registries and those that do only cover a small fraction of the overall population. Many patients are not diagnosed and are therefore not recorded. This can occur due to lack of access to primary care, with patients dying undiagnosed at home, or due to misdiagnosis.
Advertisement
The new model developed for this study, the Global Childhood Cancer microsimulation model, incorporates data from cancer registries in countries where they exist, combining it with data from the World Health Organisation's Global Health Observatory, demographic health surveys and household surveys developed by Unicef. The model was calibrated to data from public registries and adjusts for under-diagnosis due to weaknesses in national health systems.

In most regions of the world, the number of new childhood cancer cases is declining or stable. However, the authors estimate that 92% of all new cases occur in low and middle-income countries, a higher proportion than previously thought.

The most common childhood cancer in most regions of the world in 2015 was found to be acute lymphoblastic leukemia, with the notable exception of sub-Saharan Africa. There were around 75,000 new cases globally, including nearly 700 in North Europe, over 1,500 in West Africa, over 3,500 in East Africa and nearly 30,000 in South Central Asia. In East and West Africa, Burkitt's lymphoma was more common, with over 4,000 cases in East Africa and over 10,000 in West Africa. For example, there were around 1,000 cases in the Democratic Republic of the Congo and Ethiopia, while only around 20 in the UK.

"Health systems in low-income and middle-income countries are clearly failing to meet the needs of children with cancer. Universal health coverage, a target of United Nations Sustainable Development Goals, must include cancer in children as a priority to prevent needless deaths," says senior author Professor Rifat Atun, Harvard University, USA.

Taking population growth into account, the authors estimate that between 2015 and 2030 there will be 6.7 million new cases of childhood cancer worldwide. Of these, 2.9 million cases will be missed if the performance of health systems does not improve. The authors hope that their findings will help guide new policies in health systems to improve diagnosis and management of childhood cancers.

The authors found that barriers to access and referral in health systems result in substantial under-diagnosis of childhood cancer in many countries. They argue that current healthcare models, which concentrate treatment in a few specialized hospitals, are not enough. By strengthening health systems more widely, well-functioning healthcare delivery networks could develop, reducing the number of undiagnosed children with cancer.

"As the hidden incidence of childhood cancer starts to come to the fore, stronger health systems are needed for timely diagnosis, referral and treatment," says Ward. "Expanding cancer registration will be important so that progress can be tracked."

The authors highlight that their results might be affected by limited data availability in some countries. There were only two countries in West Africa (Mali and Cameroon) with available registry data, so predictions for this region might be influenced by the extent to which these countries are representative of the region as a whole.

The authors also assumed that all diagnosed cases are accurately recorded in cancer registries. In practice, some cases might be diagnosed but not recorded, or might be incorrectly classified because of deficient pathology services. However, as new country-specific data become available, the model can be refined to provide updated estimates.

Writing in a linked Comment, Dr Eva Steliarova-Foucher, WHO's International Agency for Research on Cancer, France, says: "Where national data are available and used in the presented model, the proposed estimates should be robust. Yet the only way to validate these new estimates is for countries to ensure efficient provision of representative data... increasing registration coverage and improving the data quality of existing registries would help to reduce the estimation error, which is equivalent to 21 000 cases globally, based on the 95% uncertainty interval... developing efficient vital statistics systems would help to ensure registration completeness and unveil the magnitude of underdiagnosis of cancer. Currently, some mortality statistics are available in only four of 34 low-income countries and in 21 of 47 lower-middle income countries."

Neuroblastoma
Neuroblastoma is a very rare type of childhood cancer that develops in immature nerve cells ......