Napoleon's DNA to be Carried in Watches by His Admirers 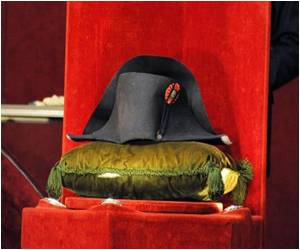 A Swiss company announced Tuesday that it plans to sell watches containing a fragment of Napoleon's hair so that the emperor's admirers will be able to carry his DNA on their wrists.

Half-millimetre slices of his locks will be placed inside a limited series of some 500 watches that are to bear the likeness of Napoleon, said Viviane de Witt, CEO of De Witt watchmakers, told AFP.


The first surgery-like operation to slice up the hair happened Tuesday in the presence of a bailiff at the De Witt factory in Geneva.

"Napoleon was already quite idolised while he was alive, when he got his hair cut people picked it up and kept it," De Witt said.
Advertisement
In this case the hair was part of a 1,000-piece trove of Napoleon memorabilia belonging to the royal family of Monaco, which fetched jaw-dropping prices during an auction in mid-November near Paris.

One of the most incredible sale prices was the 1.9 million euros ($2.4 million) a South Korean chicken mogul paid for a hat worn by Napoleon.

Viviane de Witt's husband, the company founder, is a direct descendant of Jerome Napoleon, the youngest brother of the early 19th-century French emperor.

Sequencing Fetal Genome With DNA from Mother's Blood
Entire genome of a fetus with the DNA obtained from the mother's blood was sequenced....

Quiz on DNA Fingerprinting
DNA fingerprinting, a technique that was brought forth by Sir Alec Jeffreys, has been a boon to ......