Certificate of Napoleon and Josephine's Marriage for Sale 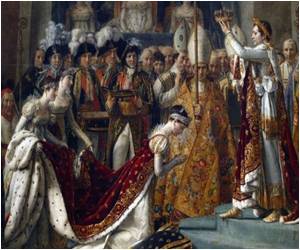 The marriage certificate of Napoleon and his first wife Josephine that sealed one of the greatest love stories in history, is to be sold at auction in September.

The document dated March 8, 1796, was signed by the future Napoleon I and his fiancee Marie Josephe Rose Tascher de La Pagerie, or Josephine, the Viscomtesse de Beauharnais.

The wedding itself took place the next day, and the contract was registered in Paris on March 18.


Despite history recording their passionate love affair, the document shows that the star-crossed lovers could also be very practical.

The marriage certificate states that the pair will "in no way be responsible for the debts and mortgages of the other" and that there will be "no common property" between them.

The auction, which will feature a number of other manuscripts and items from the era, will also feature two documents related to Bonaparte's arrest in 1794.

At a previous auction in 2007, a love letter to Josephine written before they were married, sold for more than five times the pre-sale estimate.

In the letter, sold at Christie's in London, the future French leader had written: "I send you three kisses -- one on your heart, one on your mouth and one on your eyes."

The marriage was annulled in 1810, after the couple failed to have children.

Marriage Good for the Heart
People who are married are less prone to heart attacks than singles and more likely to recover if struck with one!
READ MORE