During an interview for ABC's 'The View', the 23-year-old star said that she had been "completely overwhelmed" by her situation.

But when View's headmistress Barbara Walters said that it was not just any hospital, the actress then said that it had all been because the surgery on her teeth went badly.


"Right, I mean, it was just ... I was overwhelmed," People magazine quoted her as saying.

"I had too much work going on. I had a surgery for my wisdom teeth that went really badly. I had been in the hospital. I had two surgeries on my wisdom teeth.

"I had four taken out and they had gotten it really badly wrong. They had to drill into my jaw and I was just in really excruciating pain.

"I had an infection and a dry socket and I woke up on a Sunday morning and there was no doctor available.

"I was trying to take the minimum amount of painkillers and get through it because I had to go to work soon and I was getting ready to go do this show, The Beautiful Life, and meanwhile I still had a schedule to travel.

"And I think that I was just starting to feel completely overwhelmed. It was just too much to have this surgery go so wrong," she said.

View co-host Joy Behar next inquired as to why a psychiatric hospital handled her case, when her pain was physical.

"When they take you into the hospital for something when it goes really wrong if you're having a meltdown and you say something like 'I feel like I want to die' ... they start injecting you with things to calm down," she said.

"Like I'm petrified of needles. Like absolutely petrified ... you can't come anywhere ... I had my blood drawn once in my life for my insurance," she explained.

Barton now insists that all is well, and that she has been doing everything to keep her job and health in perfect working order.

"I just figure that if you hit rock bottom like that ... and you're around people, you know, you realize I'm nothing like these people," she said.

"Anyway, I got really healthy since then. "I've just been doing everything I can to keep my job happy and healthy and I've moved to New York with my two dogs and I have a great apartment I just got," she added.

'Mischa Barton Is A Mess And On A Downward Spiral,' Say Friends
Reports say Mischa Barton is said to have recently collapsed at her Los Angeles home because she had allegedly snorted cocaine three days in a row.
READ MORE

Mischa Has Been Drinking Since She Was 14, Says Pal
Mischa Barton developed an alcohol problem in her teens, triggering years of subsequent abuse, according to a close friend.
READ MORE 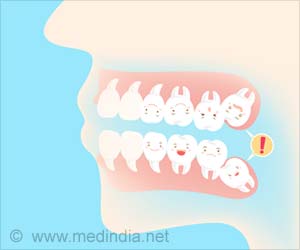 Wisdom Teeth
Wisdom teeth are the third molars that form in the oral cavity in young adults. They often remain impacted within the jawbone causing several problems.
READ MORE