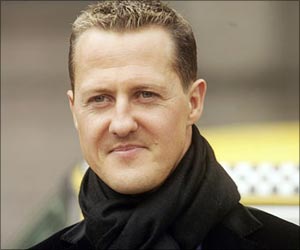 The seven-time former World Champion underwent another surgical procedure but is not out of danger. The surgery, which took around two hours, was done to remove the largest of a series of blood clots in Schumacher's brain, according to media reports.

The 44-year-old is still under medically induced coma after he suffered a severe head injury while skiing off-piste in the resort of Meribel in the French Alps Sunday. He was reportedly travelling at 60 mph when he fell and struck his head against a rock. He is thought to have been saved by his helmet which split on impact.


Doctors have refused to give a prognosis for the former Ferrari driver, who turns 45 Jan 3. Schumacher retired from Formula 1 for the second time at the end of 2012.

The human brain is exquisitely intrinsic and is the seat of all emotions. If you are curious about what makes you bad, sad, silly or glad this quiz on the brain will satiate you.
Advertisement
<< New Molecular Targets Identified in Some Hard-to-treat Mela...
Healthy Cholesterol Levels May Prevent Alzheimer's, Study >>