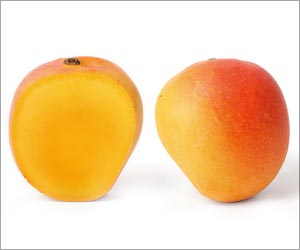 Consumption of mangoes has a positive effect on blood sugar levels and helps lower the risk of cancer, finds research.

Twenty adults (11 males and 9 females) participated in the study, which included daily dietary supplementation with 10 grams of freeze dried mango (equivalent to approximately 100 grams of fresh mango, according to Dr. Lucas) for 12 weeks.


Blood sugar levels at the conclusion of the study were significantly lower than the baseline in both male and female subjects. There were no significant changes in body composition for either gender, and BMI increased significantly in female subjects but not male subjects compared to baseline.
Advertisement
These findings are the result of a single study and more research is needed on the effects of mango consumption on human health.

"The results of this study support what we learned in our recent animal model, which found that mango improved blood glucose in mice fed a high fat diet," said Dr. Lucas.

"Although the mechanism by which mango exerts its effects warrants further investigation, we do know that mangeos contain a complex mixture of polyphenolic compounds. Research has shown that several other plants and their polyphenolic compounds, such as isoflavone from soy, epigallocatechin gallate from green tea , and proanthocyanidin from grape seed , have a positive effect on adipose tissue," the researcher stated.

Another research led by Susanne Mertens-Talcott, Ph.D., Assistant Professor and Director for Research, Institute for Obesity Research and Program Evaluation of Texas A 'n' M University, examined the effects of polyphenols found in fresh mangos on cancerous and non-cancerous breast cells.

This study suggested that mango polyphenols might limit inflammatory response in both cancerous and non-cancerous breast cells.

Because this was an in vitro study, more research is needed to determine whether mango polyphenols can have the same effect in humans.

The research was presented this week at the Federation of American Societies for Experimental Biology (FASEB) in Boston.

Mango and Grapes are Healthy for the Gut
Mango and grapes have higher levels of prebiotics and help keep the gut healthy, claim scientists .....

Blood Sugar-Conversion
Our easy to use blood sugar calculator helps you to get your blood sugar conversion results either ....

"Mangoes the Best Medicine" to Protect Against Breast, Colon Cancer
Mangoes have been found to protect against colon and breast cancer. Lovers of the fruit now have a ....