'Lost' Egyptian Pyramid Located With the Help Of Google Earth 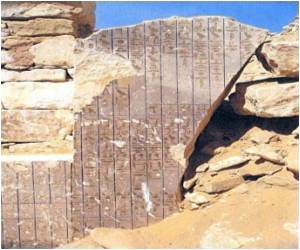 Satellite archaeology researcher Angela Micol of Maiden, N.C said that the complexes were located about 90 miles apart, and contained unusual grouping of mounds with intriguing features and orientations.

Floating pyramids filled with suspended skyscrapers, a 'solar valley' that has streetlights and swimming pools heated by the sun, buildings filled by tree towers, and houses
Advertisement

One site located in Upper Egypt, just 12 miles from the city of Abu Sidhum along the Nile, features four mounds each with a larger, triangular-shaped plateau.

The site complex is arranged in a very clear formation with the large mound extending a width of approximately 620 feet-almost three times the size of the Great Pyramid.

The London Eye also known as the Millennium Wheel is said to attract more tourist than the Taj Mahal and Pyramids of Giza.
Advertisement
"Upon closer examination of the formation, this mound appears to have a very flat top and a curiously symmetrical triangular shape that has been heavily eroded with time," the Discovery News quoted Micol wrote in her website Google Earth Anomalies.

Mysteriously, when zooming in on the top of the triangular formation, two circular, 20-foot-wide features appear almost in the very center of the triangle.

Some 90 miles north near the Fayoum oasis, the second possible pyramid complex contains a four-sided, truncated mound, which is approximately 150 feet wide.

"It has a distinct square center which is very unusual for a mound of this size and it almost seems pyramidal when seen from above," Micol wrote.

Located just 1.5 miles south east of the ancient town of Dimai, the site also has three smaller mounds in a very clear formation, "similar to the diagonal alignment of the Giza Plateau pyramids," Micol said.

"The color of the mounds is dark and similar to the material composition of Dimai's walls which are made of mudbrick and stone," the researcher wrote.

According to Micol, both sites have been verified as undiscovered by Egyptologist and pyramid expert Nabil Selim.

Selim discovered that the smaller 100-foot mounds at the site near Abu Sidhum are a similar size as the 13th Dynasty Egyptian pyramids, if a square base can be discovered.

"The images speak for themselves. It's very obvious what the sites may contain but field research is needed to verify they are, in fact, pyramids," Micol said.

The researcher had previously located several possible archaeological sites with Google Earth, including a potential underwater city off the coast of the Yucatan peninsula.

She believes that the use of infrared imagery will allow scientists to see the extent of the complexes in greater detail.

The sites have been sent to Egyptologists and researchers for further investigation and "ground truthing," she said.

Researchers have developed a new digital imaging software that can create a full, 3 dimensional panorama of the bladder when used with any current endoscope.
Advertisement
<< Olympic Synchronized Swimmer Reveals Method Behind Looking ...
'Counterfeit Products' Being Sold In 95 Percent of Shops in... >>

Drinking Beer or Wine Every Day Could Cause Age-related Diseases
View all
News Archive
News Resource
Advertisement
News Category
Can Monoclonal Antibody Prevent Malaria? First Monkeypox Case in a Child Confirmed in Germany Nip Bedsores in the Bud With a Self-monitoring Mattress Dementia Risk and Heart Defects: Are They Related? How to Decipher a Baby's Cry of Pain?
More News
Sign up for Wellness Consult a Doctor Sign up for Selfcare

Pregnancy Confirmation Calculator Accident and Trauma Care The Essence of Yoga Post-Nasal Drip Indian Medical Journals Drug - Food Interactions Color Blindness Calculator Blood - Sugar Chart Selfie Addiction Calculator Noscaphene (Noscapine)
This site uses cookies to deliver our services. By using our site, you acknowledge that you have read and understand our Cookie Policy, Privacy Policy, and our Terms of Use