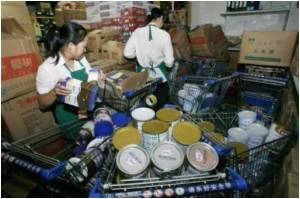 It has emerged that almost 95 percent of shops in the Chinese city of Shenyang are making or selling counterfeit products.

All shops in Shenyang were shut after it was falsely reported that authorities were about to launch a crackdown on stores keeping fake products.

Officials in Shenyang have now asked store owners to reopen after 95 percent of shops remain closed in the wake of the online rumour.


The rumour sparked fears that the local council needed to get more revenue and had ordered taxmen to come down hard on shop owners, the Daily Mail reports.
Advertisement
Local officials, however, denied the story and appealed for store owners to reopen after they received many complaints from residents who could no longer find shops open.

According to the Southern Metropolis Daily, shop closures had started on 13 July and spread from there, as more rumours spread about the supposed fines.

Shopkeepers questioned by local media said they would rather close their doors than lose money.