Loneliness  a Serious Issue in the Elderly 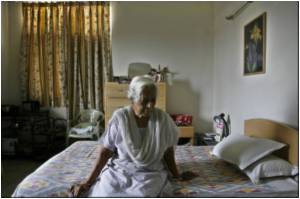 A group of five charity organizations has launched the Campaign to End Loneliness in the UK to help old people from feeling lonely.

A report, Safeguarding The Convoy - A Call To Action From The Campaign To End Loneliness has been released, which discusses in detail the ongoing problem of isolation among old people in the UK. The report terms loneliness as the 'hidden killer'.

It is a sorry situation that affects one in ten elderly people who eat poorly, drink heavily, and take very little exercise. The loss of interest that accompanies an absence of social interaction might actually lead to Alzheimer's disease or depression.


It could also affect the immune and cardiovascular systems. The feeling of dejection could also pass from one old person to another like an epidemic.

Alzheimer''s disease is a progressive neurodegenerative disease affecting memory and thinking and making the person increasingly dependent on others.
Advertisement
The study commented on the factors that brought about a lonely existence. Ill health and difficulties in getting around prevent people from meeting with family and friends. Families too move away and the old people are left behind.

As Andrew Barnett, director of the Calouste Gulbenkian Foundation which primarily funded the campaign says, there are emotional and psychological effects too, besides the practical.

Laura Ferguson, campaign director, emphatically states that the issue is a responsibility which needs to be shared between individuals, the voluntary and community sector, national and local government.

Depression is a common disorder and many worldwide suffer from depression. Early recognition of symptoms and signs of depression can help in taking a holistic approach to the management of depression.
Advertisement
<< Poor Work Ability Linked to Decline in Health
Boys Infect Boys With Swine Flu >>