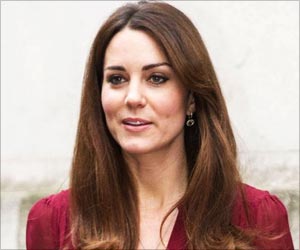 The mother-of-two launched a new global initiative, 'Young Minds Matter', as she took over the site, writing, "For too long we have been embarrassed to admit when our children need emotional or psychiatric help."

Around £2.5 Billion Spent Every Year in Britain for Treating Smokers With Mental Health Issues

A new report reveals that nearly £2.5 billion is spent every year in Britain for the care of people with mental health issues who also smoke.
Advertisement
‘Kate Middleton launched a new global initiative to raise awareness of children's mental health, as she took over the British edition of news website The Huffington Post.’

Kate said that she and William, the second in line to the British throne, 'would not hesitate to seek help' for their children. Kate further added that they hoped 'to encourage George and Charlotte to speak about their feelings'.


The Duchess of Cambridge became involved with children's charities shortly after her 2011 wedding. Her work has touched on issues such as addiction and family breakdown.

Pranab Mukherjee visited National Institute of Mental Health and Neuro-Sciences (NIMHANS) to inaugurate its heritage museum in Bangalore.
Advertisement
Kate wrote, "I often heard some heart-breaking stories about lives that had been torn apart, with devastating impacts for all involved, particularly children. What I did not expect was to see that time and time again, the issues that led people to addiction and destructive decision making seemed to almost always stem from unresolved childhood challenges."

The Huffington Post published data showing that one in three parents worry that they will look like a bad mother or father if their child has a mental health problem.

She called it 'a privilege' to guest-edit the site, vowing to tackle the 'taboo' of mental health problems and 'to celebrate the amazing work being done to improve and understand the mental health of young children'.

If a family has trouble getting mental health care for their children in a community-based setting, then they head to their local ED when they need care.

A-Z Drug Brands in India The Essence of Yoga Selfie Addiction Calculator Sinopril (2mg) (Lacidipine) Blood Pressure Calculator How to Reduce School Bag Weight - Simple Tips Sanatogen Indian Medical Journals Vent Forte (Theophylline) Hearing Loss Calculator
This site uses cookies to deliver our services. By using our site, you acknowledge that you have read and understand our Cookie Policy, Privacy Policy, and our Terms of Use