Is Yawning Contagious for Babies? 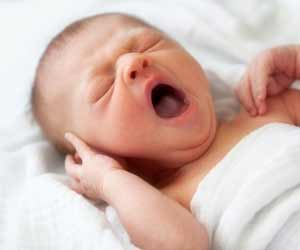 Yawns are very common and contagious in humans, but do babies prefer yawning? A new study is digging deeper to find out the neural basis of babies' preference for yawning.

Contagious yawning is observed in many mammals, but there is no such report in human babies. Whether babies recognize yawning is an unanswered question.
Advertisement
‘Are yawns contagious for babies? Yawning is common in humans, but do babies like yawning? A new study suggested that 5- to 8-month-old babies show face-specific brain activity in response to yawning.’
Read More..

A new study in Chuo University and Japan Women's University provides a new insight to this question. It suggested that 5- to 8-month-old babies show face-specific brain activity in response to yawning. This study was published online in Scientific Reports.


In this study, at first, researchers focused on the babies' looking time to yawning and mouth movement: opening mouth and moving tongue sideways against the cheek. In the experiment, 3- to 8- month-old babies were presented yawning and mouth movement side by side, and they looked at the yawning for longer that at the mouth movement. This result suggests that babies in first half-year of their life prefer yawning.
Advertisement
Next, researchers measured the 5- to 8- month-old babies' brain activity while they viewed yawning and mouth movement each using functional near-infrared spectroscopy (fNIRS). From previous fNIRS studies, it was found that the hemodynamic responses in the occipitotemporal areas increased in response to the facial movement because this area plays a role in face processing. Based on such evidence, it was expected that the hemodynamic responses increased when babies were viewing yawning compared to mouth movement. As expected, babies' hemodynamic response increased in response to yawning, but not to mouth movement. This implies that the neural basis of preference for yawning is seen even in younger babies.

"This is the first study revealing the babies' preference for yawning, and its neural activity related to yawning processing," said Shuma Tsurumi from Chuo University.

Source: Eurekalert
Advertisement
<< Wide Variation among Hospitals in Complications after Cardia...
Over 11 Million Years of Healthy Life Lost due to Childhood ... >>

Longer Yawns May Indicate Bigger Brain Size
Mice yawn the shortest, about 0.8 seconds on average. Humans, of course, had the longest yawns, ......

Yawning Cools Down The Brain
You may yawn out of sheer boredom. But in the process you might be unwittingly cooling down your ......

Yawning Contagiously Depends on Whether You Know the Person Who Triggers It
A new study published in the journal PLoS One suggests that yawning could be contagious depending .....