In the Land of the Nile, Taps Run Dry 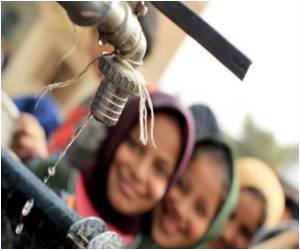 Six months into her pregnancy, Tahani Rabia continues to ignore doctor's orders and rises before dawn every morning, praying that when she turns on the tap the water will flow.

But more often than not, the rusty tap runs dry in her little home a mere 10 kilometres (six miles) from the Nile River.

"The doctor told me I had to rest, but I get up around 5:00 am because if there is any water in the pipes it runs out by seven," said the veiled 18-year-old, who lives on the outskirts of Kirdasa in Egypt's Giza governorate.


"I can't carry water back from the Nile because it's too heavy with the baby and it's not suitable to drink anyway, so I store as much as I can from the tap and ration our daily use," she explained.

Even as many people in the country are having a tough time to get a proper water supply this summer, many children in various parts of Bihar's Bhojpur district have developed
Advertisement
"When we run out, we turn to our neighbours to see if they have any to spare."

The tap in the single room that Tahani shares with her husband hasn't worked for days, and the neighbours have been a lifesaver.

Hers is a story echoed across Egypt, where thousands living just a stone's throw from the Nile suffer supply and sanitation problems as their government becomes increasingly entangled in a war over water with up-river nations.

Egypt has dominated the Nile for decades and refuses, along with neighbouring Sudan, to sign a new pact the other countries say would lead to more equitable sharing.

In an attempt to secure larger shares of the precious resource, Ethiopia, Kenya, Rwanda, Tanzania and Uganda all signed the agreement earlier this month.

That prompted Cairo to launch a diplomatic offensive in hopes of ensuring the country is not brushed aside in a matter vital to the country's future.

Egypt, which relies on the river to meet 90 percent of the water needs of its 80 million people, argues that it has a historic right to the Nile and has threatened legal action to preserve its interests.

But experts say the pact will have little effect on the people of Egypt, whose troubles stretch far back and stem mainly from outdated water grids and flawed domestic water policies.

"The problem is the distribution of the water -- who is using it and for what -- and equity in people's right to safe water," said Habib Ayeh, a geopolitical expert and researcher at the American University in Cairo.

But Ayeh, who recently authored a book on the demise of Egypt's "fellahs," or farmers, estimates that one in four Egyptians does not have adequate access to drinking water.

"The water sent to people's homes is not enough to meet minimal needs because of both quantity and the power with which it is pumped through the grid," he told AFP.

Farmers in the northern region of Daqhaliya took to the streets this week to protest over inadequate supplies for drinking and irrigation -- a problem that is expected to worsen with rising temperatures and rapid population growth.

Hosni Khordagui, who heads the United Nations Development Programme's regional water programme in Cairo, warns that the number of people living under the "water poverty" line in Egypt will snowball over the next decade.

"The problem is that 85 percent of our water from the Nile goes to irrigation and it would be difficult to reallocate that to other uses because of the economic revenue it brings in," he told AFP.

Even if the new deal does not cut back on Egypt's share of the Nile, water poverty is a daunting reality as the population grows by an estimated 1.5 million people annually, Khordagui said.

Six decades ago, Egypt offered each citizen an average of 2,600 cubic metres (92,000 cubic feet) of water per year, according to Khordagui. By 2025, he estimates the average will drop to 500 cubic metres.

For the people of Kirdasa, it is a warning that hits home hard.

"It's been four days since we last had drinking water in these taps," says Mona, another resident of Kirdasa. "You get used to it, but this is no way to live. We pay our bills. Where is our water?"

Ayeh notes that Egypt, which is entitled to 55.5 billion cubic metres of Nile water annually under treaties signed more than 50 years ago, has no solution but to rethink how it divides the resource.

"There is no link between Egypt's current water problem and the new pact," he added.

"The problem is that people cannot drink and yet Egypt is exporting strawberries in December."

Protection Against Cholera Possible by Using Sari to Filter Water

A study conducted in Bangladesh has revealed that sari can be a sustainable protector from cholera.
Advertisement
<< Even Early Hunters Caused Some Climate Change
Measuring Volcanic Ash Possible With Space-Borne Laser Inst... >>

In the Land of the Nile, Taps Run Dry Personalised Printable Document (PDF)