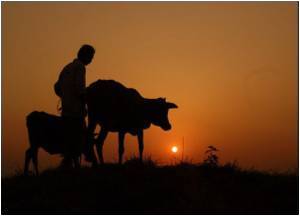 Climate change is not a recent phenomenon. Activities of even early hunters, researchers say, could have upset the atmosphere's methane balance.

While extensive hunting in North America drove mammoths and other large mammals to extinction, it could have also disturbed the methane balance of the atmosphere, sparking off the global cool spell that followed.

The large grazing animals would have been producing plentiful methane, a greenhouse gas, from their digestive systems before they became extinct nearly 13,000 years ago.


According to Felisa Smith, of the University of New Mexico in Albuquerque, these animals would have emitted 9.6 megatonnes of methane annually, reports New Scientist.
Advertisement
Ice core records reveal atmospheric methane levels dipped from about 700 parts per billion to just 500 ppb at the time of their extinction.

Smith believes the absence of methane emissions from the extinct species is a possible cause.

The study has appeared in Nature Geoscience.

Ancient Leaves Offer a Peek About Future Climate
Scientists have revealed that fossil plant remains from millions of years might offer a peek on ...

India, Brazil Reaffirm Commitment To Reducing Impact of Climate Change
Leaders of India and Brazil on Wednesday reaffirmed their concern for climate change and its ......