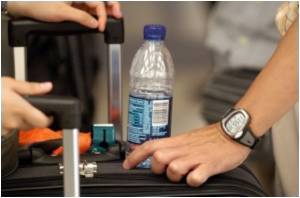 Researchers from C-crest laboratories report their results today at the 110th General Meeting of the American Society for Microbiology in San Diego.

"Despite having the cleanest tap water a large number of urban Canadians are switching over to bottled water for their daily hydration requirements. Unsurprisingly, the consumer assumes that since bottled water carries a price tag, it is purer and safer than most tap water," says Sonish Azam, a researcher on the study.


Regulatory bodies such as Food and Drug Administration (FDA), Environmental Protection Agency (EPA) and Health Canada have not set a limit for the heterotrophic bacteria counts in bottled drinking water. However, according to the USP not more than 500 colony forming units (cfu) per milliliter should be present in drinking water.

Campylobacteriosis is a severe form of diarrhea caused by a bacterium Campylobacter jejuni. Causes, symptoms, treatment of campylobacteriosis are discussed in detail.
Advertisement
The study was initiated in response to a C-crest employee's complaint of fowl taste and sickness after consumption of bottled water at the company. Azam and her colleagues Ali Khamessan and Massimo Marino randomly purchased several brands of bottled water from a local marketplace and subjected them to microbiological analysis. They discovered more than 70 percent of famous brands tested did not meet the USP specifications for drinking water.

"Heterotrophic bacteria counts in some of the bottles were found to be in revolting figures of one hundred times more than the permitted limit," says Azam. In comparison the average microbial count for different tap water samples was 170 cfu/mL.

Azam stresses that these bacteria most likely do not cause disease and they have not confirmed the presence of disease-causing bacteria, but the high levels of bacteria in bottled water could pose a risk for vulnerable populations such as pregnant women, infants, immunocompromised patients and the elderly.

"Bottled water is not expected to be free from microorganisms but the cfu observed in this study is surprisingly very high. Therefore, it is strongly recommended to establish a limit for the heterotrophic bacteria count as well as to identify the nature of microorganisms present in the bottled water," says Azam.