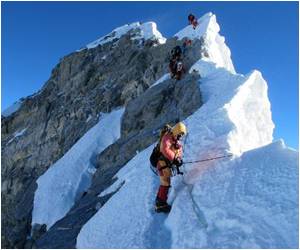 The climbers on Mount Everest kept tweeting to apprise well-wishers about their situation as an earthquake measuring 7.9 on the Richter scale hit Nepal at 11.41 a.m. on Saturday.

At around 12,00 p.m. Daniel Mazur @danielmazur, a climber from England, tweeted: "A Massive earthquake just hit Everest. Base camp has been severely damaged. Our team is caught in camp 1. Please pray for everyone."
Advertisement

In another tweet, Mazur said: "#Everest base camp damaged. Camp 1 swept away, Daniel Mazur team stuck in camp 1. #Nepalquake".
Advertisement
Thomas Kilroy @mykitchensync, a friend of Mazur replied: "Keep safe Daniel - hang in there. We are all thinking of you and hoping your route to safety sees you home."

At around 12.00 p.m., another climber Adrian Ballinger @alpenglowexp , from Squaw Valley, California, US, tweeted: "Big #earthquake just now in Everest BC. Lots of rock and ice falling. We all ok. Hoping more exposed South Side also ok. #Everest2015"

Around 3.00 p.m. climber Ji Davidson from Fort Collins, Colorado, US, tweeted: "We're safe at camp 1. Apparent earthquake. We had avi nearby, powder blast & glacier moved. Injuries in base camp.

Nepal Earthquake Toll Rises To Over 700, Many Still Trapped Under the Rubble
A national police spokesman was quoted by the BBC as saying that 711 people had died in the quake, ....

Earthquake Claims Over 360 Lives and Leaves Over 1,300 Injured in Southwest China
More than 360 people died and over 1,300 people were injured after southwest China was rocked by a ....