World Day against Trafficking in Persons 2015 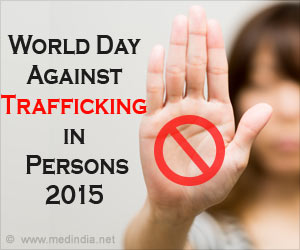 Slavery is one of the most despicable and vile institutions to have been created by man. According to the United Nations, at least 2.5 million people are still subjected to modern day slavery, and human trafficking is a huge part of this problem. World Day against Trafficking in Persons is meant to highlight the plight of those who fall victim to this crime. Human trafficking is a global problem that facilitates and sustains modern-day slavery.

Modern-day slavery involves and includes indentured servitude, forced prostitution, forced labor, child labor and organ removal. A quarter of all of the victims of human trafficking are children with around half of them being from the Middle East and Africa. A third of these victims originate from Asia and the Asia-Pacific region. The problem is especially pervasive in underdeveloped and theocratic states like the Islamic Republic of Mauritania, where about 4% of the country's population lives in enslavement. According to some estimates, the actual figure is more likely to be in the vicinity of 20%. The problem is also endemic in societies and cultures where social discrimination has been institutionalized over centuries or millennia as is the case with the caste system in India or the subjugation and discrimination of Arabized populations with sub-Saharan African origins in parts of North Africa like Mauritania and also in Middle Eastern countries like Yemen and Oman.


Human trafficking is not necessarily global but can also occur within a country's borders. This is especially true in the case of human trafficking in India, wherein children and women from poor rural communities are often brought to or sold in cities for child labor, domestic help or sexual exploitation. In many cases, human trafficking doesn't even involve movement of people but simply involves business transactions in which people are treated as commodities. According to UN estimates, the illegal trade generates as much as $31.6 billion and it is one of the biggest and fastest growing activities of crime syndicates, in many cases uses to fund terrorism.

Although the Global Slavery Index cannot be treated as a reliable source of human trafficking data because of flaws in data collection methods, it still gives us a rough idea of the global prevalence of slavery. India ranks fifth in the global slavery index. A large part of the problem here is on account of social inequality and widespread discrimination on the basis of caste and socio-economic position. While India has made great strides in improving social equality and there has been considerable social mobility in the past few decades, the gaps between rich and poor have once again started to widen. This only serves to exacerbate the problem and perpetuates exploitative relationships. The problem is further compounded by widespread illiteracy and superstition in both urban and rural parts of India.

In India, human trafficking is primarily used to supply women for commercial sexual exploitation, while children, women and men are also trafficked for forced or bonded labor. Although reliable government statistics are hard to come by, it is estimated that as many as 20 to 65 million Indians are victims to the human trafficking trade. Women and young girls are often sold in servitude to families, and also to men for forced marriage, especially in areas where the sex ratio is imbalanced because of practices like female feticide or infanticide. Young women and girls are also often sold and forced into prostitution, while many children are trafficked to be used for forced labor in factories, as domestic servants and even as beggars.

India also occupies a prominent position in the international flesh trade as women and girls from across the border in Nepal and Bangladesh are often trafficked for forced prostitution. A large number of women from India are also trafficked to the Middle East, again to be exploited in the commercial sex trade.

Often, poor Indians who are desperate for work fall victim to unscrupulous agents and middlemen who lure them with the promise of higher paying work overseas. In most such cases, they end up being duped into forced labor and find themselves in situations of debt bondage. Fraudulent recruiters often charge a huge fee that reduces them to the status of indentured servants. In many cases, domestic workers are trafficked overseas to work as servants and they are underpaid, exploited and mistreated. All too often these migrant workers are subjected to physical and sexual abuse.

In an effort to tackle the problem of international human trafficking the UN General Assembly passed the 'Global Plan of Action to Combat Trafficking in Persons' in 2010, to urge governments to take coordinated action in tackling this problem. The plan sought to integrate anti-trafficking policies and strategies into other UN programs so as to boost the effectiveness of such measures and to strengthen international security. A UN Voluntary Trust Fund was also setup under the plan to help victims of human trafficking. In 2013, a resolution was also passed to mark the July 30 as World Day against Trafficking in Persons to raise more awareness and trigger greater action.

While India has been a signatory to various international anti-trafficking treaties and has also passed the Immoral Trafficking Prevention Act (ITPA), as is often the case in India, there is poor enforcement of the laws. This is mainly because of widespread corruption, the indifference of authorities and a general lack of awareness. The Bonded Labor Abolition Act, the Child Labor Act, and the Juvenile Justice Act protect juveniles from exploitation through labor or abuse, but children are still trafficked to cities to work as domestic help and also in bonded labor. It isn't uncommon to see child workers in grocery stores, restaurants and small scale factories in almost all of the major cities.

Until the exploited lower classes are empowered through education and awareness is raised among the general population, people will continue to be afflicted with apathy and this shall be yet another fight left for NGOs to fight on their own.

Efforts to Fight 'Modern Slavery' of Trafficking Outlined By Obama
President Barack Obama spoke out against human trafficking. He described it as 'modern slavery', while outlining new measures to tackle the problem.
READ MORE

150 Years After Gettysburg, United States Still Tormented by Racial Issues
150 years ago, General John Gordon led troops for the South at Gettysburg in the US Civil War before becoming a leader of the Ku Klux Klan, the infamous white supremacist organization.
READ MORE