Written by Shaun DMello
Medically Reviewed by The Medindia Medical Review Team on August 1, 2015 at 7:18 PM 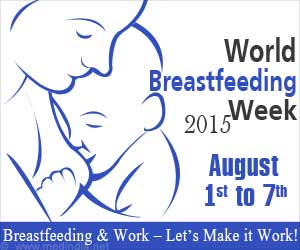 World Breastfeeding Week is an annual celebration to promote exclusive breastfeeding for the first six months of an infant's life. It was first celebrated in 1992 by the World Alliance for Breastfeeding Action (WABA) but today it is observed in over 120 countries around the world.

The WABA along with the World Health Organization (WHO) and United Nations Children's Fund (UNICEF) organize events around the world with millions of participants each year. The goal is to educate people on the tremendous health benefits of breast milk and to establish a global breastfeeding culture.

Importance of BreastFeeding
From antibodies, to the exclusive nutrients, the benefits of breastfeeding are incalculable.
Advertisement

WHO and UNICEF recommend exclusive breastfeeding within an hour after the baby is born until the baby is six months old, as mother's milk has been proved to be the best source of nutrition for infants. After that, the child can be introduced to pureed fruits and vegetables to supplement breastfeeding until the child is at least 18 months old.


This year, World Breastfeeding Week is from August 1 to 7.

Quiz on Breastfeeding
New moms-to-be can be skeptic about breastfeeding and related issues. Test your knowledge on the basics of breastfeeding and discover how motherhood is actually the greatest joy of all!
Advertisement
Working women in India face insurmountable hurdles when it comes to raising their children. There are very few mother-friendly workplaces and breastfeeding-friendly employers are non-existent! Most offices in India don't provide new mothers with an area to use a breast pump and so they are forced to use the restroom instead. There are no refrigeration facilities and so storage of breast milk can become an issue. A few offices allow new mothers to work from home for a couple of weeks after their maternity leave but this is not the norm.

Superstitions and myths regarding breastfeeding reduce the chances of women breastfeeding. Women may believe that bottle-feeding is better as it allows the mother to track the exact amount of milk that her baby is consuming. However, it is easier for a baby to suckle at their mother's breast than to suck milk from the nipple of a bottle. Mothers may be told that formula-fed babies sleep better. Research shows that formula-fed babies tend to sleep for longer durations than breastfed babies but this is because formula takes longer to digest. Since formula takes longer to digest, it starts to ferment and this increases the chances of bloating, gas and discomfort.

Instant formulas have gained acceptance to a point where it is considered "unnatural" to not use them! Although Indian laws prohibit the promotion of infant foods, manufacturers find ways to make sure that they remain the topic of discussion. For instance, a woman's magazine may feature an interview with a seemingly unbiased new mother who swears by a certain type of baby formula. She may go on to talk about how formulas give the mother more freedom while providing her baby with a nutritionally complete diet. However, numerous studies have proved that breast milk is far superior to any formula on the market.

Poor policy framework has become one of the key problem areas. In the Indian Constitution, Maternity Benefits Act women are entitled to maternity benefits without fear of losing her job. This includes 12 weeks of paid leave and once she comes back to work, she is entitled to 2 nursing breaks during the curse of her work day. While there are laws to protect breastfeeding, poor enforcement of the rules negates their benefits. Furthermore, the supplementary foods lobby is very powerful and has cause to push its own agenda.

No woman should ever have to choose between the health and well being of her infant and her career or income. Sadly, this is the very choice that thousands of women across the Indian subcontinent are forced to make. In addition to gender equality and societal attitudes that affect breastfeeding among women in the Indian workforce, women across rural India are subjected to other forms of discrimination and misinformation. To tackle the problems of breastfeeding and infant mortality in India, awareness needs to be increased about the importance of breastfeeding and concrete steps need to be taken to effect meaningful changes in dominant social structures and institutions that otherwise seek to undermine and undervalue women's physical needs, while exploiting their reproductive abilities. Protection of a woman's right to breastfeed is rightly coming to be recognized as a vital component of human rights, but in India we also need to tackle social attitudes, a lack of education and awareness, poor maternal health and the lack of access to basic health care services.

While access to basic health care services and provisions for maternity leave are a distant dream for women who live under conditions of bonded labor in many parts of rural India, the situation isn't much better in India's metropolitan. Workplace policies provide inadequate protection to mothers and maternity legislation is often not enforced effectively enough. Steps need to be taken to ensure adequate maternity leave to mothers, both before and after childbirth so that a woman can nurture her newborn to the best of her abilities. Maternal care for both mothers and their infants needs to be made more affordable. Strategies to combat infant mortality and under nutrition need to be overhauled, as a dramatic policy and funding shift is needed when it comes to tackling the problem. At present, the major focus in infant malnutrition is in programs for food aid and micronutrient supplementation. While these programs are no doubt essential in many cases, the scope of the problem could be greatly reduced if the emphasis shifted to prevention of infant malnutrition through exclusive breastfeeding of children under 6 months of age.

According to the World Health Statistics Report for 2009, breastfeeding figures had risen marginally across the world, with exclusive breastfeeding among infants under 6 months having risen to about 40%. This figure is still abysmal considering that all children benefit from breastfeeding. In India, breastfeeding needs to be made a top public health priority as it requires not just financial investment, but political, social and legal initiatives.

Some smaller steps that need to be taken include:
Reference Links:

Switching Baby from Bottle to Cup
News Archive
News Resource
Advertisement
News Category
JUUL E-Cigarettes Banned from US Market Busy Americans Get The Least Sleep At 40 Years Deepika Padukone Rushed To Hospital After Sudden Chest Pain Vegans, Vegetarians and Fish Eaters Have Better Memory Than Meat Eaters How to Reduce the Risk of Acute Kidney Injury By Drinking Coffee?
More News
Sign up for Wellness Consult a Doctor Sign up for Selfcare