Written by Dr. Meenakshy Varier
Medically Reviewed by The Medindia Medical Review Team on January 6, 2017 at 11:59 AM 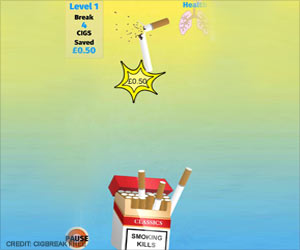 A smartphone app that could help smokers to quit has been developed by academics at Queen Mary University of London (QMUL) and Kingston University.

Cigbreak Free works like a regular gaming app, where players can progress through levels and gain rewards completing tasks.

Cigarette Smoking - A Silent Killer
Smoking kills the smoker silently, pushing him towards serious illnesses, which slowly lead to death.
Advertisement
‘Cigbreak Free is an app that helps to 'gamify' health messages and behavior change techniques as a way of embedding them in a person's mind, to help them quit smoking.’

This app incorporates a combination of around 37 behavioral change techniques which are theory-based methods for changing behavior.


These techniques were selected by QMUL health psychologists to help smokers quit.

Marijuana Legalization Spikes Syndrome Related to Weed Smoking
Cannabinoid Hyperemesis Syndrome is on a rise due to legalization of marijuana in many states across U.S.
Advertisement
As part of public health smoking cessation services, the app has now been commissioned for use by five London boroughs-Kingston, Kensington and Chelsea, Hammersmith and Fulham, Tower Hamlets and the City of Westminster.

Smoking rates are much higher among the poor.

In 2014, the North East of England had the highest prevalence in smoking at 19.9% while the South East had the lowest prevalence at 16.6%.

In the game, players have to swipe a certain number of cigarettes to break them within a time limit.

As the player progresses through levels, the app also allows the users can calculate how much money they are saving.

Professor Robert Walton from QMUL's Blizard Institute said "I was keen to exploit the current trend in gaming to see it could be put to good use and improve people's health."

"Based on our previous research, we selected and embedded health messages and behavior change techniques within the game, to help promote smoking cessation." Walton added.

Some of these behavior changes techniques include showing the player the health consequences of a behavior, gaining points for grabbing healthy items, or providing virtual financial incentives.

These techniques are so subtly embedded in the game that the player might not realize that it exists.

Games creation processes lecturer Hope Caton from Kingston University said "The good thing about a smartphone gaming app is that you can play it anywhere. Craving is a short-term thing, so if you get a craving at 11am, you can play the game in the warm until it passes, rather than going out into the cold for a cigarette. You've also got something to do with your hands other than smoke."

The quick rewarding in the game is a way of giving smokers instant positive feedback.

"When you're trying to quit smoking you don't get much instant feedback except desire. Your health is better but somehow it doesn't have the same effect as being told you're winning or getting a gold star," Ms Caton explained.

The research team will begin a three-month pilot study with app users to evaluate its effectiveness.

The study is published in the British Medical Journal.

E-cigarettes Not Recommended for Smokers Who wish to Quit the Habit
The anti-tobacco advocacy group, ASH Ireland has advised quitters to instead use nicotine patches or gums instead of e-cigarettes.

Smoking And Tobacco
News Archive
News Resource
News Category
Milestone In Voluntary Blood Donation Achieved Samsung Reinvents Toilet for the Poor Which is a Better Form of Exercise: Daily or Weekly? First Phase of Foot-and-Mouth Disease Vaccination Shocking News: Polio Cases Return After a Decade in the US
More News
Sign up for Wellness Consult a Doctor Sign up for Selfcare

Drug Side Effects Calculator Loram (2 mg) (Lorazepam) The Essence of Yoga Daily Calorie Requirements Hearing Loss Calculator Sanatogen Diaphragmatic Hernia Find a Doctor Noscaphene (Noscapine) A-Z Drug Brands in India
This site uses cookies to deliver our services. By using our site, you acknowledge that you have read and understand our Cookie Policy, Privacy Policy, and our Terms of Use