Quad Bike Accidents, the Reason Behind Most Chest Injuries in Children

Written by Julia Samuel
Medically Reviewed by The Medindia Medical Review Team on November 29, 2016 at 4:55 PM 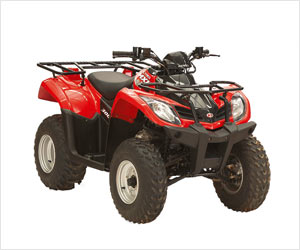 Children in all-terrain vehicle (ATV) accidents are likely to suffer serious chest injuries, according to a new study.

ATVs also known as a quad, quad bike are motorized vehicles with large, low-pressure tires, designed for off-highway use--have an average weight of 300 to 400 pounds and travel up to 75 miles per hour. ATV-associated injuries can be caused by crashes, rollovers, ejections or even disregard of simple safety precautions.

Trauma Care
Accident and trauma care is an important public health challenge that requires immediate attention. Injury (trauma) is the leading cause of death for all age groups under the age of 44.
Advertisement
‘The most common chest injury is bruising of the lung where fluid and blood gets accumulated in the lungs leading to oxygen insufficiency.’

According to the Consumer Product Safety Commission (CPSC), 24,800 children under the age of 16 were treated in hospital emergency rooms nationwide in 2014 for ATV-related injuries. This figure represents more than a quarter of all ATV-related injuries treated that year. While the American Academy of Pediatrics recommends that children under the age of 16 be prohibited from riding ATVs, regulations vary from state to state.


"The sheer incidence of chest injuries in pediatric patients evaluated after ATV accidents is rather alarming and not necessarily the type of injuries patients and their families give much forethought to when considering the risks of ATV use," said study author Kelly N. Hagedorn, M.D., radiology resident at McGovern Medical School at The University of Texas Health Science Center at Houston.

Little or No Risk of Chest Injury Found With Chiropractic Manipulation
It is well-known that during spinal manipulation, there is an occurrence of dynamic chest compression.
Advertisement
Dr. Hagedorn and colleagues performed a retrospective review of records from 1992 to 2013 for patients between 0 and 18 years old who underwent chest imaging at Memorial Hermann Red Duke Trauma Institute, a level 1 trauma center in Houston, after ATV-related incidents. During the study period, 455 patients were admitted. Of these, 102 (22 percent) had a chest injury.

"While this study only highlights a specific subset of potential injuries, their incidence and clinical significance cannot be overlooked. Other studies have demonstrated the prevalence of orthopedic and neurologic injuries, and the most recent CPSC report estimates that 23 percent of ATV-related fatalities since 1982 have occurred in children younger than 16," Dr. Hagedorn said.

Road Accidents Kill 1.25 Million Each Year, Africa is the Deadliest: WHO Report
Traffic accidents are the leading cause of death among 15-29 year olds worldwide and cost governments on average about 3% of their annual gross domestic products.

Parents Play a Vital in Encouraging Young Children to Follow Traffic Rules
Parents are vital in encouraging their children to obey the road rules and young drivers are keen to show their parents they can be trusted.

Leg Injuries and Disorders
News Archive
News Resource
Advertisement
News Category
Milestone In Voluntary Blood Donation Achieved Samsung Reinvents Toilet for the Poor Which is a Better Form of Exercise: Daily or Weekly? First Phase of Foot-and-Mouth Disease Vaccination Shocking News: Polio Cases Return After a Decade in the US
More News
Sign up for Wellness Consult a Doctor Sign up for Selfcare

Color Blindness Calculator Find a Doctor Drug Side Effects Calculator The Essence of Yoga Blood - Sugar Chart Hearing Loss Calculator Blood Pressure Calculator Find a Hospital Drug Interaction Checker Pregnancy Confirmation Calculator
This site uses cookies to deliver our services. By using our site, you acknowledge that you have read and understand our Cookie Policy, Privacy Policy, and our Terms of Use