Written by Madhumathi Palaniappan
Medically Reviewed by The Medindia Medical Review Team on November 29, 2016 at 3:58 PM 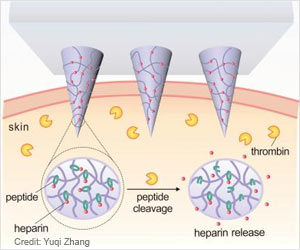 The research study, "Thrombin-Responsive Transcutaneous Patch for Auto-Anticoagulant Regulation," is published in the journal Advanced Materials.

Deep Vein Thrombosis
A blood clot (thrombus) in the deep venous system of the leg leads to deep vein thrombosis (DVT). DVT is a major cause of morbidity and mortality.
Advertisement
‘Smart patch containing hyaluronic acid and heparin helps to prevent thrombosis.’

Thrombosis occurs due to the formation of blood clot that disrupts the blood flow in the circulatory system which can lead to serious health problems resulting in a heart attack or stroke.


Blood-thinning medications such as heparin are used to reduce the formation of blood clots in the arteries. These drugs should be given in the required amount as a high dose can result in hemorrhaging and low dose can prevent the recurrence of thrombosis.

Quiz on Deep Vein Thrombosis
Did you know that prolonged sitting can cause a blood clot? Or if that clot stuck in the lungs death ensues? Learn more about deep vein thrombosis from this quiz.
Advertisement
Zhen Gu, associate professor in the joint biomedical engineering program at North Carolina State University and University of North Carolina-Chapel Hill says, "Our goal was to generate a patch that can monitor a patient's blood and release additional drugs when necessary; effectively, a self-regulating system."

Caterina Gallippi, co-author and associate professor in the joint biomedical program, said, "Two years ago, I spoke with Zhen Gu about the significant clinical need for precise delivery of blood thinners."

"We, together with Professor Yong Zhu in the mechanical engineering department at NC State, assembled a research team and invented this patch."

Smart patch is made of microneedles containing hyaluronic acid and heparin in a polymer. This polymer in turn will respond to thrombin enzyme (an enzyme which initiates blood clotting).

When the increased level of thrombin enzyme comes in contact with the microneedles of the smart patch, heparin is released into the bloodstream.

Yugi Zhang, a student from Gu's Lab said, "The more thrombin there is in the bloodstream, the more Heparin is needed to reduce clotting."

"So we created a disposable patch in which the more thrombin there is in the blood stream, the more Heparin is released."

Jicheng Yu, another student in Gu's lab, said, "We will further enhance the loading amount of drug in the patch. The amount of Heparin in a patch can be tailored to a patient's specific needs and replaced daily, or less often, as needed."

"But the amount of Heparin being released into the patient at any given moment will be determined by the thrombin levels in the patient's blood."

The research study was conducted by testing the Hyaluronic acid - Heparin smart patch in a mouse model. Large doses of thrombin were injected, this when untreated would result in a life-threatening blood clot condition in the lungs.

The author concludes that the smart patch will help to treat patients by cutting down the treatment costs. "This paper represents a good first step, and we're now looking for funding to perform additional preclinical testing," he added.