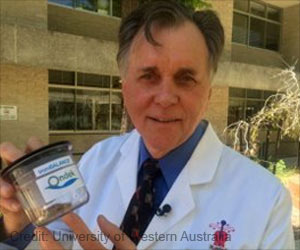 
A new drug which "fine tunes" the immune system to help prevent asthma and allergies to foods such as peanuts and shellfish, has been developed.

Asthma
It's a lung condition characterized by inflammation of the bronchi and constriction of the airways that result in coughing, wheezing or breathlessness. Allergy and other airway irritants can trigger it
Advertisement
‘The drug has the potential to be used as a preventative treatment in a child's early life when signs of asthma or allergies appear.’

Prof.Marshall is developing an oral treatment called Immbalance, which is designed to restore balance to the immune system and desensitize allergic responses.

Traffic-Related Air Pollution Increases Asthma Risk in Children
The exposure is associated with increased plasma levels of interleukin 31 (IL-31), a cytokine that promotes allergic inflammation.
Advertisement
Asthma is a long-term condition that affects a person's breathing. It is a significant cause of ill health and poor quality of life, in children and in adults.

In Australia, 1 in 10 people, over 2 million people are affected by asthma. Around 41% of the children ages 0 to 14 years have asthma.

Harnessing the Power of Helicobacter Pylori

"This actually arose from work we were doing on helicobacter, the stomach bug, for which Dr Warren and I won the Nobel Prize a few years ago," Dr Marshall said.

Dr Barry Marshall and Dr Robin Warren were awarded a Nobel Prize in 2005 for their discovery that stomach ulcers can be caused by a bacterial infection.

Helicobacter pylori survives in the body by suppressing the immune system.

Professor Barry Marshall said the drug would harness the immune properties of common bacterium Helicobacter pylori, that naturally resides in the human gut and move the allergic response down into the normal range.

Studies in the USA show children infected with Helicobacter have a 45% reduction in allergies and asthma.

Helicobacter is disappearing, humans in response have become hyper-reactive to allergies.

By putting the Helicobacter back in a safe way, allergic people can be moved back into a normal range.

"By developing an oral product which contains non-viable Helicobacter we can get the immune advantages that Stone Age man used to get by having live bacteria, with none of the disadvantages."Professor said.

Dr Marshall said the drug had the potential to be used as a preventative treatment in a child's early life when signs of asthma or allergies appear.

Professor Marshall's company, Ondek, based in Perth and Sydney, has been developing the drug for the past seven years and said it can be formulated as tablets, capsules, liquids or powdered product.

Dr Marshall said it was likely the drug would be a powder that can be consumed by adding it to food and drinks.

"Children could spread the powder on their cereal or put it in a drink and over the course of a few months could supress their allergic response," he said.

"We think it's going to be 100% safe. It won't remove your immune system; it will just take the edge off.It appears when everything is very clean and children aren't exposed to enough infectious or non-infectious bacteria the immune system can get ramped up," Professor Marshall said.

The drug was ready to be manufactured before safety testing could begin on animals and then humans.

It is hoped clinical trials in children will begin in three years and hopes to make Immbalance available within five years.

People With Food Allergy at Higher Risk Due to Confusing Food Labels
Reading food labels for possible allergens is important. But when the food labels do not clearly mention the allergens, it causes serious allergic reaction to the consumer.

Advertisement
<< Benzodiazepine Use Increases Risk of Hip Fractures Among Alz...
Can Stress and Anxiety Be Reduced With Probiotics? >>

Iron Intake Calculator How to Reduce School Bag Weight - Simple Tips Drug Interaction Checker Indian Medical Journals Turmeric Powder - Health Benefits, Uses & Side Effects Drug Side Effects Calculator The Essence of Yoga Sanatogen Nutam (400mg) (Piracetam) Selfie Addiction Calculator
This site uses cookies to deliver our services. By using our site, you acknowledge that you have read and understand our Cookie Policy, Privacy Policy, and our Terms of Use