'Beer is proof that God loves us and wants us to be happy.' - Benjamin Franklin

We can go a step further now and say that beer can not only make us happy but it may be good for our health too! Strange but true. 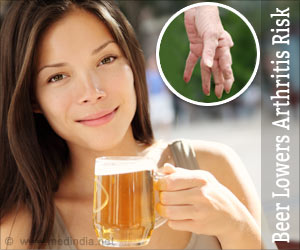 A recent study published in the journal Arthritis & Rheumatism reported that women who drank 2 to 4 glasses of beer a week can reduce the risk of rheumatoid arthritis by 31 percent as compared with women who don't drink beer.

Researchers from Harvard and the Division of Rheumatology, Immunology and Allergy at the Brigham and Women's Hospital conducted two studies over a period of 20 and 28 years on over 200,000 women to examine the link between alcohol consumption (beer, wine, or liquor) and the risk of developing rheumatoid arthritis. And they found that beer was not so bad after all.

Wine and liquor too reduced the risk but it was not significant, they reported. Although they could not explain why moderate beer consumption reduced the chances of getting the disease, the researchers okayed 5.0 to 9.9g of alcohol per day. There's 13.2g of alcohol in a standard bottle or can of beer.

The researchers however suggested that 'the cumulative effect of long-term moderate alcohol exposure, not short-term alcohol consumption' may reduce the risk of developing rheumatoid arthritis.

Rheumatoid arthritis (RA) is a chronic, autoimmune disease that affects the lining of the joints of the hands and feet causing swelling and pain in the area. RA can also affect the skin, eyes, lungs and blood vessels. It is more common in women and those over 40 years of age.

 Swollen and painful joints of the hands and feet

 Stiffness in the morning

 Nodules under the skin in the arms

Treatment: There is no cure for rheumatoid arthritis. Inflammation can be relieved by medications such as NSAIDs and corticosteroids (prednisone). Certain anti-rheumatic drugs can slow the progression of the disorder and prevent permanent damage. Your doctor may also prescribe immune-suppressants and TNF-alpha inhibitors or other drugs to treat RA. Exercises for flexibility of joints are also an integral part of the treatment.

So, how are beer and rheumatoid arthritis linked? Scientists are still working on it.

The benefits of drinking beer don't seem to end with rheumatoid arthritis. A number of earlier studies too found things praiseworthy about beer.

Harvard researchers observed that moderate drinking of alcohol (beer or wine) reduced the risk of cardiovascular disease. They found that alcohol protects against heart disease by raising the levels of HDL.

So much so, researchers at Harokopio University, Athens, Greece, went on to say that beer consumption actually improves artery function and structure by reducing stiffness in the arteries in healthy non-smokers. But like all things, moderation is the key.

Alcohol has also been found to increase sensitivity to insulin. That means, a bit of beer is allowed even if you have type-2 diabetes.

The benefits of moderate drinking be it beer or wine go beyond the heart. 'The social and psychological benefits of alcohol can't be ignored. A drink before a meal can improve digestion or offer a soothing respite at the end of a stressful day; the occasional drink with friends can be a social tonic. These physical and psychic effects may contribute to health and well-being,' say Harvard scientists. However, they strongly recommend taking at least 600 micrograms of folate every day if you are drinking, even moderate. That is because alcohol increases risk of various cancers. And taking folate will cancel alcohol related increase in the risk.

So, beer up, ladies! Your glass of beer may actually save you from rheumatoid arthritis.

Comments should be on the topic and should not be abusive. The editorial team reserves the right to review and moderate the comments posted on the site.
sheelaphilo

Interesting, does this study apply even for Men?

Don't know this news has mentioned only for women

Yes, this is applicable for men also. But the fact is men are affected less when compared to women. Affected ratio of Women to Men is 2 to 3:1.

Dementia can be Prevented by Moderate Drinking

A new study by the Center for Mental Health Research at the Australian National University says that moderate drinking in later life can help prevent dementia.

Chemo means medicine or drug; therapy means treatment. Chemotherapy refers to the use of cytotoxic drugs in cancer treatment.

Make sprinting a possibility! Relieve chronic arthritic pain by having a knee replacement done at affordable prices. Check out our list of world-class hospitals.

Most parents when told that their child has arthritis find it hard to believe it, as arthritis is regarded an adult's disease.

Spondylolisthesis is a condition of the lower spine in which one of the bones of the vertebral column slips out of its proper place and slides over to the vertebra below it.