Drink a Cup of Coffee to Increase Longevity

People who consume coffee and tea are likely to live longer, finds a study. The US scientists suggest that coffee helps to block harmful chemicals that promote inflammation.

The research team at the Stanford University claims that drinking coffee and tea may help people to live longer by reducing chemicals in the blood that can trigger heart disease.


The team believes that the ingredient called caffeine in coffee and tea helps to block chemicals in the blood that promote inflammation.


‘Highly active antiretroviral therapy (HAART) should be combined with improved patient management including frequent monitoring for pathogens such as Treponema pallidum, to reduce the risk of syphilis outbreak.’


Link Between Inflammation and Caffeine
Inflamed blood vessels are more likely to become stiffer, which is a risk factor for heart disease. Inflammation also plays a key role in many other diseases.

The study involved two groups - first group had participants between the ages of 20-30 and group 2 involved people over the ages of 60. Blood tests showed that the participants who had higher levels of caffeine in the bloodstream had low levels of the harmful chemical called Interleukin-1-beta (IL-1-Beta).

Caffeine consumption was linked to lower levels of IL-1-Beta. When injected into mice, IL-1-Beta led to 'massive systemic inflammation, along with high blood pressure." It also resulted in immune cells - white blood cells that fight infection and - clogging the animal's kidneys. It also found more platelets, which make blood more likely to clot.

Dr Davis said, "That something many people drink - and like to drink - might have a direct benefit came as a surprise to us."

"What we've shown is a correlation between caffeine consumption and longevity. And we've shown more rigorously, in laboratory tests, a very plausible mechanism for why this might be so."

David Furman of the Stanford University's Institute for Immunity, Transplantation and Infection said, "More than 90 percent of all noncommunicable diseases of aging are associated with chronic inflammation."

Dr Furmann added, "It's also well known that caffeine intake is associated with longevity. Many studies have shown this association. We've found a possible reason for why this may be so."

His colleague Mark Davis added, "Our findings show that an underlying inflammatory process, which is associated with aging, is not only driving cardiovascular disease but is, in turn, driven by molecular events that we may be able to target and combat."

The study is published in Nature Medicine.

Moderate, Regular Coffee Consumption may Have Neuroprotective Effects Against MCI
Cognitively normal older individuals who never or rarely consumed coffee and those who increased their coffee consumption had a higher risk of developing MCI.
READ MORE 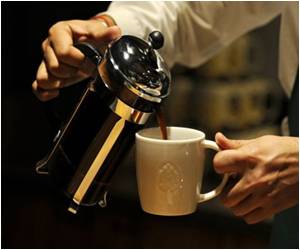 Association Between Coffee Consumption and Cardiovascular Disease Risk
Coffee lovers rejoice! A new study highlights that the lowest cardiovascular disease mortality risk is seen at an intake of approximately 3 cups of coffee per day.
READ MORE

Coffee Consumption Reverses Non-alcoholic Fatty Liver Disease
Coffee protects against fatty liver disease by raising levels of a protein, Zonulin, which lessens the permeability of the gut and the risk of liver injury.
READ MORE

Bubbles and Brews - Alcohol FactsTips to Live LongerPancreatitisAmyotrophic Lateral Sclerosis (ALS)Caffeine and DecaffeinationCoffeeCoffee, Caffeine and Your HealthTop Health Tips to Overcome TirednessSeven Surprisingly Healthy Foods
Sign up for Wellness Consult a Doctor Sign up for Selfcare