Written by Sudha Bhat, M.Pharm, R.Ph (US)
Medically Reviewed by The Medindia Medical Review Team on February 24, 2016 at 1:46 PM 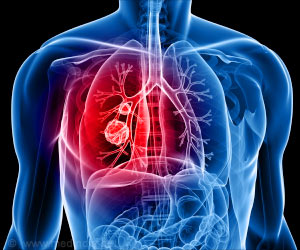 Interstitial lung abnormalities are a group of disorders which involve lung inflammation or scarring of the lung tissue between and supporting the air sacs, which could lead to lung stiffness and could also affect your breathing abilities in the long run. Rheumatologic or autoimmune diseases are some of the known causes of interstitial lung diseases.

Interstitial lung abnormalities are commonly seen in older individuals and are thought to lead to early stages of pulmonary fibrosis. In one of the studies, these abnormalities have been linked to reductions in lung capacity, exercise capacity, gas exchange, amongst others.

Early Lung Cancer Diagnosis Must for Heavy Smokers With Pneumonia
Lung cancer is the leading cause of cancer mortality in the United States, with a five-year survival rate of just 17 percent.
Advertisement
‘Interstitial lung abnormalities on CT scans signal higher-than-average mortality within 3-9 years.’

According to a recent study published in the Journal of the American Medical Association, interstitial lung abnormalities were strongly associated with an increased risk of death.


Lead author Rachel K. Putman, M.D., from the Brigham and Women's Hospital in Boston, and her associates analyzed data from four prospective cohort studies to investigate whether interstitial lung abnormalities are associated with increased mortality.

Lung Biopsy
The procedure by which tissue samples are obtained from the lung is known as lung biopsy. The biopsy tissues obtained from the lungs are examined by a pathologist.
Advertisement
The study participants were middle-aged to older people from four separate research cohorts as follows:
Status of interstitial lung abnormality was determined by chest CT evaluation. These imaging abnormalities (which included reticular abnormalities, diffuse centrilobular nodularity, non-emphysematous cysts, honeycombing, traction bronchiectasis, amongst others) were evaluated as specific patterns of increased lung density affecting more than 5% of any lung zone.

The authors reported that the presence of interstitial lung abnormalities were linked to a greater risk of death in all four cohorts over a median follow-up times ranging from 3 to 9 years when compared with those who did not have interstitial lung abnormalities. This was seen after adjustment was made for smoking, chronic obstructive pulmonary disease (COPD), cancer and other co-existing conditions.

The AGES-Reykjavik study was the only study to assess causes of death and the higher rate of mortality seen in this group could be explained by a higher rate of death due to respiratory disease (13%), particularly pulmonary fibrosis.

Putnam and his associates reported in the journal JAMA that the pattern of abnormalities may be an important risk factor for death in older populations, rather than being merely a precursor to more advanced fibrosis.

They noted that while additional studies were needed to confirm the findings and to determine the risk factors for interstitial lung abnormalities and the events that lead to the death of the patient.

The authors commented, "Although the survival rate of people with idiopathic pulmonary fibrosis (IPF) appears to have increased slightly in recent years, median survival times after diagnosis is 3 to 5 years, which is worse than that of most malignancies. Given the other correlations between IPF and interstitial lung abnormalities, we hypothesized that the presence of interstitial lung abnormalities would be associated with an increased rate of mortality."

The results of the study could have significant implications for clinical practice and research, however requires further investigation.

New Era in Lung Transplantation
Toronto XVIV0 Lung Perfusion System can safely and effectively improve the function of high-risk donor lungs so that they can be successfully transplanted into patients.