Ending Discrimination of the Mentally Challenged

People with mental illness constitute 8% of the world's population and a considerable number of them require support to lead a normal life.

Their health condition, just like a lot of other disease conditions, are no fault of their's, but the backlash that they receive from society is severe.


Staying Away From Care:


‘Greater awareness and strict laws will ensure that discrimination against mental health patients is prevented, letting them into mainstream society.’


People with mental illness that ranges from depression to schizophrenia, do not visit the psychiatrist for fear of being branded as a mentally imbalanced person. Though treatment and care could aid them in leading a normal life, they hesitate to go in for professional support.

This results in deterioration of their condition, which may have been easier to treat early on. People associated with mental health patients may then soon notice erratic or behavior that is out of the ordinary.

International Study of Discrimination and Stigma outcomes (INDIGO) interviewed 700 people with schizophrenia to understand the stigma they face. This study was conducted by the Institute of Psychiatry, King's College London along with World Psychiatric Association's (WPA) Global Program Against Stigma and Discrimination.

The INDIGO study found that:
Stigma Towards Mental Illness Among University Students:

In a study conducted by Feeg VD and colleagues on University students from various disciplines, it was found that stigma against mental illness was prevalent.

In the study, 309 students were asked to fill in a web-based survey. The results of the study showed that
Stigma in the Labor Market:

Researchers Hipes C and colleagues, in their study to understand the stigma of mental illness in the labor market, sent fictitious job applications to an employer, indicating that the candidate had mental illness.

They found:
The shocking and alarming levels of discrimination that exists in society against people with mental illness is triggered largely due to the absence of adherence to treatment by patients or complete lack of treatment. This could lead to potentially violent episodes that increase public skepticism.

The general public's reaction towards mental illness is a major reason why patients stay away from medical care, as it could lead to their condition becoming known.

a) Read up about Mental Illness: Reading about mental illness, severity and ways to cope will help people understand the condition better. Moreover, personal experiences and stigma faced by mental health patients will further aid in breaking the shackles of stigma. Earlier, mental health problems were associated with superstitious beliefs that included the notion that such people were 'possessed' by the devil. Instead of routine treatment, such people received exorcism.

b) Respect for People with Mental Illness: People with mental illness should be treated with respect and spoken to with care. Shouting aloud when speaking to them, making derogatory remarks when they pass by or avoiding them in public spaces should be prevented.

c) Find Out What They are Good at: Everyone has a special skill or can contribute positively towards society. Help people with mental illness understand their strengths and facilitate their entry into the job market. When such people begin contributing to society, they will feel appreciated, triggering positive changes to their mental health.

d) Be Patient: There may be an instance, or two (or it may never occur) when a patient with mental illness shows uncontrolled anger or anxiety, this should not be a reason for further alienation. Instead, read up about how to react to such situations and remain calm and patient towards the patient.

e) Drive Hope: Spread hope among patients as well as caregivers, so they have something to look forward.

The stigma against people with mental illness is a scourge in our society and should be weeded out to make it an equal playing field. Awareness campaigns and stringent laws against discrimination will discourage such stigma and should be pro-actively supported by governing bodies.

There is increased awareness about the stigma associated with mental health and some people are consciously looking for a change. The theme for last year's World Mental Health Day 2015 celebrated on October 10th was 'Dignity in mental health'. Let us hope that such awareness campaigns help us in building a more inclusive society.

Study Reveals Many Teenagers With Mental Illness Are Untreated
A new study by E. Jane Costello, reveals that more than half of adolescents with psychiatric disorders receive no treatment of any sort.
READ MORE 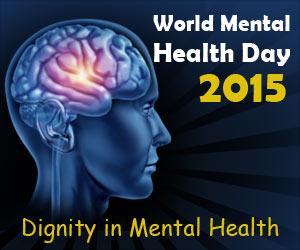 Exorcism  Driving Out the Devil
Exorcism or the ritualistic act of driving out evil spirits is a special type of faith healing. The heated Psychiatry vs Exorcism debate still goes on....
READ MORE