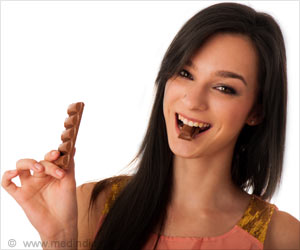 Chocolate has always been a delight to eat and is now more than just a sweet treat. Among the innumerable benefits of chocolate, it can also improve cognitive ability, which is a pleasant surprise for the many chocolate lovers across the world, stated a new study.

A bite of chocolate is a gastronomic experience as you make your way through gooey goodness that fills the mouth with oodles of tasty cocoa, sweetened to taste absolutely divine. It's never really been difficult to eat chocolate, but very difficult to resist it. Weight watchers and diet conscious have steadfastly stayed away from chocolates, finding it hard to say no but saying it nevertheless.

Dark Chocolate May Protect You Against Pancreatic Cancer
Pancreatic cancer is deadly and foods like dark chocolate, which are high in magnesium, can dramatically reduce the risk of developing it.
Advertisement
‘Eating chocolates in moderate quantities improves cognitive ability, helping you think better!’

The study by Crichton GE and colleagues was published in the Journal Appetite and was conducted on 968 study participants between 28 and 98 years of age. The consumption of chocolates frequently was found to have a significant increase in
The study conducted by these researchers found an improvement in cognitive behavior, but the exact mechanism of action needs further study. This in no way is a measure for eating more chocolates, but the careful quantities consumed will help in better cognitive ability.


The pinch in the study is that these fantastic properties of chocolate are hidden in the cocoa flavanols, which are found in abundance in dark chocolates and not in the more popular milk chocolates.

Eating Chocolate in Modest Quantities Reduces Risk of Heart Disease and Stroke
Flavonoids, and other compounds, such as calcium and fatty acids, are related to the reduced cardiovascular risk associated with chocolate consumption.
Advertisement
Cardiovascular Benefits of Dark Chocolate

A study conducted by Higginbotham E and Taub PR and published in the Journal Current Treatment options and Cardiovascular Medicine (Dec 2015) found that dark chocolate has cardiovascular benefits. Dark chocolate contains cocoa flavonol, epicatechin, which is lost in milk chocolate. This flavanol has found to be beneficial in cardiovascular health as it influences
Proposed Mechanism of Action:

The proposed mechanism of action of dark chocolate on cardiovascular health is attributed to
Other Benefits of Dark Chocolate:

Know Chocolates Better
Chocolates are healthy. Here are the most important things you have to know about chocolates - its history, types, health benefits of eating different kinds of chocolates and why people love chocolates. It's all here.