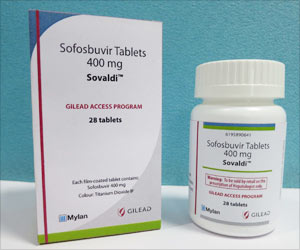 Globally, 170 million people are infected with hepatitis C. The HCV incidence in India may approach 2%, but adequate population studies are lacking and there is wide variation among subpopulations studied. For instance, a small study among Maharashtra villagers showed a prevalence of 0.09%, but a study of "professional blood donors" in India revealed a high prevalence between 55-87%. Chronic HCV infection, often asymptomatic for decades, can lead to cirrhosis, liver cancer and end-stage liver failure requiring liver transplant.

Over the past decade, treatment for HCV has dramatically improved from the days of poorly tolerated and sub-optimally effective (40% response rate) treatment regimens including interferon and ribivarin. Many well-tolerated and highly effective medicines have emerged, including sofosbuvir, which can effectively cure HCV in greater than 90% of cases, depending on the genotype ("strain") of the hepatitis C virus.
Advertisement

Sofosubvir works by mimicking a nucleotide necessary for the replication of genetic material, thereby inhibiting HCV replication of its RNA genetic code. It can be used with or without interferon, the latter being a poorly tolerated drug due to many side effects. Sofosbuvir/Interferon side effects include:
It is an expensive drug, but less so in India, costing $300 USD per treatment course.

Amiodirone is a highly effective antiarrhythmic (it corrects irregular heart beats) with many known side effects including pulmonary fibrosis (lung scarring), liver toxicity and turning the skin blue with chonic use. It is more commonly used in an acute setting when other antiarrhythmic drugs have failed. Everyday amiodirone use is becoming increasingly rare because of the side effects associated with chronic use and the availability of other, less toxic antiarrhythmics that are safer to use on a long-term basis.

When sofosbuvir and amiodirone are used in combination the heart rate can slow down ("bradycardia") to the point of fatal cardiac arrest. One patient death has been attributed to this drug-drug interaction and three instances of patients needing emergency pacemaker placement have also been reported. Gilead Sciences therefore recommends against prescribing these two medicines simultaneously.


Fortunately, many alternatives to amiodirone exist, such as sodium or calcium channel blockers. Furthermore, amiodirone is not as commonly prescribed in the past, so this drug-drug interaction should not significantly affect prescribing patterns of sofosbuvir.

New Treatments for Hepatitis C
Until very recently, infection with the Hepatitis C Virus (HCV) had been very difficult to treat, .....

New Pill Against Hepatitis C Approved
Harvoni, a daily pill to treat hepatitis C that is simpler to administer than long-standing ......

Generic Sofosbuvir Pills for Sale in India to Treat Hepatitis C
The Drug Controller General of India approved the manufacture and sale of the generic versions of .....