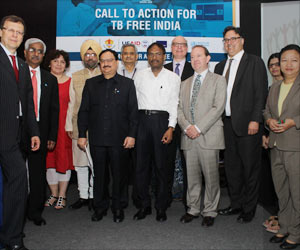 Out of the estimated 8.8 million new tuberculosis (TB) cases worldwide, the World Health Organization (WHO) reports that India continues to have the highest prevalence of TB, with over 2 million cases reported in 2013 alone.


He also announced the launch of a Missed Call Campaign, massive media campaign and special strategy for addressing key populations. "We will launch a toll free number soon where people can call for help and guidance. Even a missed call will suffice. Our team will revert and ensure that the person is covered by the program and gets free accurate diagnosis and right treatment for tuberculosis," added Nadda.


Progress in Fight Against TB

India implemented DOTS  Directly Observed Treatment, Short Course  a WHO strategy that was launched as the Revised National TB Control Programme (RNTCP) in India in 1997.

"We have cured almost 20 million TB patients and saved more than 3 million people. But we still have over a million patients who are yet not under our fold," said Bhanu Pratap Sharma, Secretary, Health Ministry. "Private sector should also ensure that TB cases are diagnosed and treated according to the standards of tuberculosis care and guidelines."

Since the implementation of RNTCP, services for drug-resistant tuberculosis and TB-HIV collaborative care have been scaled up and made available across the country. More than 70,000 MDR-TB (Multi Drug Resistant TB) patients and 2,000 XDR-TB (Extensively Drug Resistant TB) patients have been put on the standard treatment. NIKSHAY - a real time case based, web-based TB surveillance system has been rolled out, and the first ever and largest national drug resistance survey is already underway in India.

But India's primary challenge continues to be early diagnoses of tuberculosis. Dr. Jagdish Prasad, Director General of Health Services, said that every single case should be tested for drug resistance at the earliest possible. "This is more cost-effective than testing them later when cases have become extensively drug resistant," he said.

WHO also reported that India tops the list of the world's 'missed' TB cases. Of the 9 million cases of tuberculosis in 2013, only 5.7 million were both detected and notified to national TB programs. They were 'missed', either because they were not diagnosed or because they were diagnosed but not reported. This is a major challenge.

Jose Luis Castro, Executive Director, International Union Against Tuberculosis and Lung Disease (The Union) said that newer challenges have made the fight against tuberculosis a tougher. "TB is becoming drug resistant, people with diabetes are 2-3 times at higher risk, tobacco use is a common risk factor for tuberculosis and other non-communicable diseases...if you're cured from tuberculosis but continue to use tobacco, you're twice as likely to get TB again."

Nadda, however, has promised to fight these challenges through the following:
He said that the health ministry will work out schemes and sensitize patients to help complete treatment. "We need to link patients with various welfare schemes of the government so that their earnings increase and ensure they have nutritional support, which will enhance the immunity status of each member of the family."

But the fight against TB cannot be an isolated one with the government doing all the work. Anshu Prakash, Joint Secretary, Health Ministry, explained, "Under the RNTCP, we have formed a task force with WHO as its technical partner. USAID has committed $4.6 million funding and International Union Against Tuberculosis and Lung Disease (The Union) will be its secretariat."

Prakash underlined the three pillars in the campaign. "First, we should get everyone (who are not in the program) under the program; second is an effective media and communication campaign for TV, radio, print media, social media etc; and the last is to reach the corporates and private sector for this initiative."

India also needs to find ways to increase domestic funding to ensure that the 'Call to Action for TB Free India' is well-resourced. "We must mobilize a wide range of stakeholders to demand and sustain high-level of domestic commitment to end tuberculosis in India. We must also tap into the energy and influence of key stakeholders to drive political, administrative, and technical solutions to specific barriers affecting TB control in India," said Jamhoih Tonsing, Regional Director, The Union.