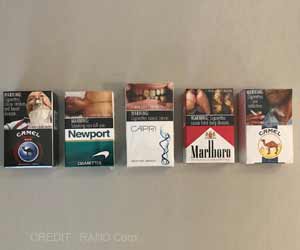 Graphic health warning labels on cigarette packages can help some adult smokers to quit smoking, reports a new study. The findings of the study are published in the journal Health Education Research.

Placing graphic anti-smoking warning labels on cigarette packages may deter some adults from purchasing tobacco products, but the strategy is unlikely to influence those smokers who are most addicted to nicotine, according to a new RAND Corporation study.

If labels are understandable and informative, it's more likely that people will worry about consequences of smoking and ultimately, be discouraged from doing it.
Advertisement
‘Placing graphic health warning labels on cigarette packages may prevent some adults from purchasing tobacco products.’
Read More..
Tweet it Now


Conducted in a one-of-a-kind laboratory that replicates a convenience store, the study found that the effects of graphic health warning labels on adult smokers' purchase of cigarettes depend on their level of nicotine dependence. Such labels typically include an image of a tobacco-caused illness such as oral cancer in gruesome detail, and words warning about the health consequences of smoking.

Smoking causes many diseases and affects the overall health of smokers.
Advertisement
"By reducing the likelihood of cigarette purchases at convenience stores among less-addicted smokers, graphic health warning labels could contribute to a range of public health benefits," said William G. Shadel, lead author of the study and a senior behavioral scientist at RAND, a nonprofit research organization. "But the graphic warning labels probably are not going to change the cigarette purchasing habits of people who are more thoroughly addicted to the nicotine in cigarettes."

Half of the adults shopped in the convenience store lab under conditions where cigarette packages on display clearly showed a graphic health warning label. These graphic health warnings included packages displaying words that said "Cigarettes cause strokes and heart disease" with an unpleasant image of a person using a non-rebreather mask and words that said "Cigarettes cause fatal lung disease" along with detailed images of a diseased lung.

The other half of adult visitors to the convenience store lab shopped under conditions where the cigarette packages on display showed typical words-only warnings like "Smoking causes lung cancer, heart disease, emphysema, and may complicate pregnancy" and "Cigarette smoke contains carbon monoxide."

People who reported less addiction to nicotine were much less likely to purchase cigarettes during their visit when the cigarette displays included graphic health warning labels, as compared to when cigarettes had typical 'words only' warnings on the packaging.

Among participants reporting a high-level of nicotine addiction, cigarettes were purchased at close to the same rate as when graphic warning labels were displayed on packages.

"Less-dependent smokers, who often are light or intermittent smokers, are a large and growing segment of tobacco users," Shadel said. "The graphic warning labels may be one way to prevent this group, which includes a lot of younger people, from becoming long-term users of cigarettes."

Pictorial Health Warning Labels Can Communicate the Risk of Smoking

The pictorial health warning labels on tobacco use can improve the communication of risk to smokers.
Advertisement