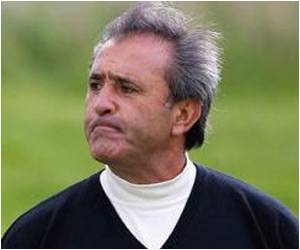 Seve Ballesteros, one of golf's greatest and most charismatic players, died at his home in Spain on Saturday at the age of 54 following a long battle with brain tumour.

The five-time major winner, who had announced his retirement in 2007, had collapsed at Madrid Airport in October 2008 and two days later it was confirmed that he was suffering from a brain tumour.

He had been recuperating at his home after four operations on the tumour and a course of chemotherapy.


"Today, at 2.10am (1010 AEST) Spanish time, Seve Ballesteros passed away peacefully surrounded by his family at his home in Pedrea," Fox Sports quoted a statement, as saying on his official website.

Quick valuable reference that enlists interesting facts about brain tumors.
Advertisement
"The Ballesteros family is very grateful for all the support and gestures of love that have been received since Seve was diagnosed with a brain tumour on 5th October 2008 at Madrid Hospital la Paz."

"At this time the family asks for respect and privacy at such a painful time. Thank you very much," it added.

Ballesteros was awarded with the BBC's Lifetime Achievement Award at the Sports Personality of the Year event in 2009.

He won the Open three times, the Masters twice and played an inspirational role in the Ryder Cup, helping Europe to lift the trophy in 1985, 1987, 1989 and 1995 before captaining them to another victory at Valderrama two years later.

The most amazing and complex organ in the entire universe, the human brain continues to remain an enigma.
Advertisement
<< Nanoflowers May Help Blind Regain Vision
Sonography and Power Doppler Help in Early Diagnosis of Juv... >>

The human brain is exquisitely intrinsic and is the seat of all emotions. If you are curious about what makes you bad, sad, silly or glad this quiz on the brain will satiate you.
Advertisement
News A-Z
A B C D E F G H I J K L M N O P Q R S T U V W X Y Z
What's New on Medindia