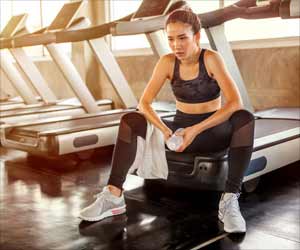 Hot summer weather, stressful situations, and intense workouts can produce unpleasant sweaty odors. But what if clothing could cover up these embarrassing smells with a burst of fragrance? Now, researchers have modified cotton fabric to emit a lemony citronella aroma upon contact with sweat. They report their body-odor-fighting strategy in ACS Applied Materials & Interfaces.

Advertisement
‘Are you wondering how to get sweat smell out of your gym clothes? Check this out, a new modified cotton fabric that emits a lemony citronella aroma upon contact with sweat can help neutralize sweaty gym clothes.’
Read More..

In recent years, scientists have developed smart fabrics that react to stimuli such as light, temperature or mechanical stress and respond in certain ways, such as by changing color or conducting an electrical signal. Researchers have also explored different methods to release fragrances from fabrics. Carla Silva, Artur Cavaco-Paulo and colleagues wanted to develop and compare two new strategies for releasing a fragrance -- β-citronellol, a lemongrass-derived scent used in some insect repellants -- from cotton fabric in response to sweat.


The first approach involved an odorant-binding protein (OBP) found in pigs' noses that binds to β-citronellol and other scent molecules. To the OBP, the researchers attached a protein domain, called a carbohydrate-binding module (CBM), that binds to cotton.
Advertisement
In their second strategy, the researchers packaged the fragrance in liposomes that displayed CBMs, which anchored the lipid carriers and their cargo to the fabric. The team exposed the modified cotton fabrics to an acidic sweat solution, and the low pH of the simulated perspiration caused the OBP and liposomes to release β-citronellol.

Comparing the two strategies revealed that the OBP released a quick burst of scent, while the liposomes showed a slower, controlled release. The liposomes could also hold more fragrance than the other approach. The two strategies could prove useful for different clothing applications, says the research team.

Worried About Excessive Sweating This Summer? Try Out Some Sweet Scents To Wave Away The Odor
Are you sweating a lot due to the sun? Are you afraid of smelling bad during the humid monsoon? To ....

Five Simple Tips to Fight Unpleasant Underarm Odor
Bacteria that is responsible for the odor cannot survive if the pH value of the skin is low. Apple ....

Researchers May Have Found a Way to Eliminate Armpit Odor
Now, there is a possibility of preventing body odor formation by using compounds designed to target ...