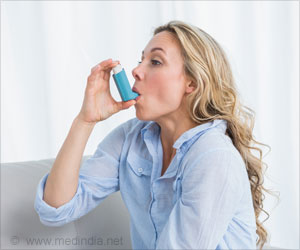 Shame and guilt for using inhalers at work prevents people with asthma from working to their full potential, reveals a new study. The findings of the study are published in the Journal of Asthma and Allergy.

It is not just respiratory symptoms or a feeling of tiredness that asthma sufferers have to face daily, many of them even have to deal with shame and a sense of guilt using inhalers at work, preventing them from working to their full potential, new research has found.

Childhood asthma is a condition that affects airways in children and interferes with their daily activities including play, sports, school and sleep.
Advertisement
‘People living with asthma are missing roughly one-tenth of work hours due to their symptoms, which also results in a loss of productivity. ’
Read More..
Tweet it Now


The World Health Organization estimates that 235 million people around the world suffer from asthma.


The study showed that asthma sufferers are missing nearly one-tenth of work hours due to their symptoms, which also result in a loss of productivity and affects their emotional well being.

Occupational Asthma (OA) is a lung disorder that occurs due to exposure to toxic substances at the workplace. The mainstay of management of OA is reduction of exposure to the toxic substances.
Advertisement
On an average, three out of four workers could not work to their full potential, showed the survey of over 1,500 symptomatic asthma patients across six countries -- Brazil, Canada, Germany, Japan, Spain, and the UK.

Overall, total work productivity dropped by one third (36 percent) due to asthma.

"But, what struck us most was the emotional response to asthma in the workplace," said Kevin Gruffydd-Jones from Box Surgery in Britain.

The study results found that on an average, up to one-tenth (9.3 percent) of work hours were missed in a single week because of workers' asthma symptoms.

Asthma sufferers in India too face similar challenges, according to doctors.

"One cannot ignore the environment and other related conditions which in any case can go against the patient; she/he has to be prepared all the time with medications, inhalers, and other prescriptions," said Navneet Sood, Senior Consultant, Pulmonology, Dharmshila Narayana Superspeciality Hospital in Delhi.

"Strong will power is needed to continue with normal daily life as being careless is not an option," Sood told IANS.

"Being an asthma patient one is prone to minor or major attacks. A large number of patients have to be on daily treatment to keep symptoms under control," Gyandeep Mangal, Senior Consultant in Respiratory Medicine at Sri Balaji Action Medical Institute in Delhi, told IANS.

"The disease affects the daily life of an individual where she/he has to take a number of precautions for their well being along with medications and at the same time have to continue with their jobs, home tasks, and other work," he added.

Do you find it difficult to breathe especially during the cold weather? You may need to get tested for asthma, a respiratory condition that is induced by allergies.
Advertisement