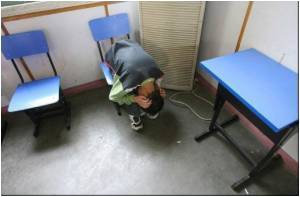 A study by an international team of researchers have linked a rare form of autism to deficiency of an amino acid which they claim can be treated with a common dietary supplement.

US researchers were able to isolate a genetic mutation in some autism patients which speeds up metabolism of certain amino acids.

These essential amino acids -- branched chain amino acids or BCAAs -- are not produced naturally in the human body and must be acquired through food.


Because of the speeded up metabolism, the patients with this mutation burned through their stores of the amino acid more quickly than normal, creating an imbalance the researchers think may be linked to the neuro-behaviorial symptoms of autism.

It is difficult to distinguish between the myths and facts where autism is concerned. Test your knowledge on the facts of autism with this quiz.
Advertisement
"It was very surprising to find mutations in a potentially treatable metabolic pathway specific for autism," said co-author Joseph Gleeson of the University of California, San Diego.

"What was most exciting was that the potential treatment is obvious and simple: Just give affected patients the naturally occurring amino acids their bodies lack."

The genetic mutations were identified after researchers studied the genomes of several autistic children who also suffered epileptic seizures.

Gleeson's team then genetically engineered mice to test the impact of the dietary supplement, which is available in health food stores.

The mice with the genetic mutation displayed autism-like symptoms, including spontaneous epileptic seizures -- but when treated with the supplements, their condition improved.

"Studying the animals was key to our discovery," said first author Gaia Novarino, a staff scientist in Gleeson's lab.

"Once we found that we could treat the condition in mice, the pressing question was whether we could effectively treat our patients."

Researchers were able to use the supplement to correct the amino acid imbalance in the human patients as well, but there was not enough data to determine whether the treatment led the autism symptoms to improve.

Roughly a quarter of autism patients suffer from epileptic seizures, but Gleeson said this particular condition is believed to be "extremely rare."

While researchers do not yet understand why this works, the identification of the genetic mutation can also help establish a basis for screening autism and epilepsy patients.

Autism - Whats Missing in the Genes?

Scientists have carried out a study on variations in gene expression to evaluate the role of genes in individuals with autism.
Advertisement
<< Parliamentary Approves for NIMHANS Bill
Future Classrooms Would Require No Teachers >>

Influence of Diet and Toxins in Autism Epidemic