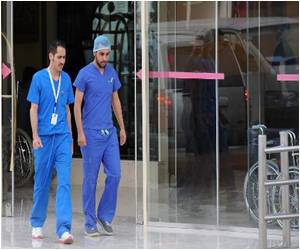 Five new deaths from the MERS coronavirus, taking the country's death toll to 92 have been announced by the Saudi health ministry.

A statement released overnight added that 14 new cases of Middle East Respiratory Syndrome were detected in the kingdom, bringing the total to 313 since the virus first emerged there in September 2012.

As the death toll from the MERS virus hit 85, King Abdullah was in the Saudi Commercial hub in a bid to reassure the worried public of Saudis.
Advertisement

Among the five who died were two elderly Palestinians and a Bangladeshi woman in her 40s, the statement said. The two other victims were Saudis.


Public concern over the spread of MERS mounted last week after the resignation of at least four doctors at Jeddah's King Fahd Hospital who refused to treat patients for fear of infection.

The mounting in cases of infection by the coronavirus in Saudi which sacked its health minister, the death toll reaching 81
Advertisement
On Thursday King Abdullah visited the Red Sea city and commercial hub in a bid to reassure the public amid fears the virus had mutated to make it more transmissible from person to person.

National Guard Minister Prince Mitab said his father King Abdullah went to Jeddah "to reassure the public and to prove that the exaggerated and false rumours about coronavirus are not true."

"The MERS situation is reassuring and it has not reached the level of an epidemic," he said.

That did not stop the king from dismissing health minister Abdullah al-Rabiah on Monday without an official explanation.

Labour Minister Adel Fakieh, who has taken over as acting health minister, has promised "transparency and to promptly provide the media and society with the information needed."

The World Health Organisation announced Wednesday that it had offered to send international experts to Saudi Arabia to investigate "any evolving risk" associated with the transmission pattern of the virus.

The rise in cases affected by MERS virus led to dismissal of Saudi health minister just days after he visited a hospital at the centre of growing concerns about the kingdom's handling of the virus.
Advertisement
<< Scientists Find New Way to Prevent Heart Attack and Stroke
New Metamaterial Has Potential to Reshape Neurosurgery >>

Blood Pressure Calculator Post-Nasal Drip Hearing Loss Calculator How to Reduce School Bag Weight - Simple Tips Sanatogen The Essence of Yoga Accident and Trauma Care Drug Side Effects Calculator Loram (2 mg) (Lorazepam) Selfie Addiction Calculator
This site uses cookies to deliver our services. By using our site, you acknowledge that you have read and understand our Cookie Policy, Privacy Policy, and our Terms of Use