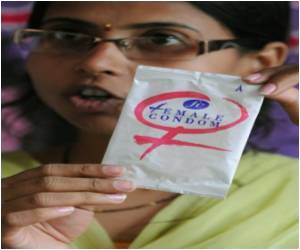 Campaigners on Tuesday lamented the fact that the female condom, just as effective as its male equivalent, has failed to gain the profile it deserves in the fight against AIDS.

"Women are tired of asking permission to save their own lives," Serra Sippel, president of the Washington-based Center for Health and Gender Equity (CHANGE) told journalists at the World AIDS Conference.

In 2008, while 2.4 billion male condoms were distributed, the figure for female condoms was only 18.2 million, she said.


And in Sub-Saharan Africa, where 60 percent of adult males are HIV-positive, the female condom was available for only one in every 300 women.

"The female condom has been available for 15 years and for 15 years it has been joked about," said Lucie van Mens, coordinator of another pressure group, Universal Access to Female Condoms (UAFC).

And yet, while shops sold any number of different variants for male condoms, she pointed out: "There is only one model available."

It was time business started putting the same kind of imaginative marketing and design into the female condom to ensure women could find one that suited them, she argued.

Another fundamental problem was the cost, said Carol Nawina Nyirenda of CITAM+ -- the Community Initiative for Tuberculosis, HIV/AIDS and Malaria.

Nyirenda, from Zambia, told reporters: "A female condom is 50 cents, compared to a male condom which is for one cent."

For Jim Clarken of Oxfam, another issue central to promoting the female condom was about control.

"It's also a key component to facilitate women having control over their own reproductive health," he said.

Studies conducted by groups in Cameroon and Nigeria had shown "an incredibly high rate of acceptability of female condoms by both men and women," he said.

As far back as 1997, a UN study conducted in 40 countries had registered acceptance levels of 96 percent.

And yet, said Clarken: "The public still knows very little about it."

Female condoms were better received however when presented as a means of contraception or even a sex toy, rather than a way of protecting oneself from AIDS, said van Mens.

"It's also important to give women the right to have fun with sex," she added.

Delegates and journalists all received a sample female condom with the conference information pack -- complete with detailed instructions.

GonorrheaCondoms And ContraceptionAIDS/HIV - Prevention And TransmissionAIDS/HIV- Lab Tests and FaqsVasectomyChlamydia TrachomatisProstitution: Fresh Stakes in the Oldest TradeSafe SexSafe, Effective Male Contraceptive Pill - The Long Wait
Sign up for Wellness Consult a Doctor Sign up for Selfcare