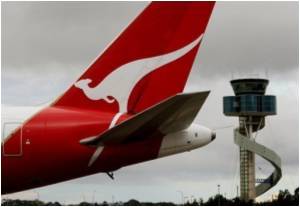 A US tourist's holiday trip to Australia and New Zealand got ruined when her small fellow passenger's screaming made her go deaf.

Jean Barnard has alleged that the three-year-old boy, who sat with her on the Darwin-bound Qantas plane in Alice Springs, screamed so severe that blood erupted from her ears, leaving her "stone cold deaf".

Barnard was helped off the plane and taken to an Alice Springs hospital, ruining her trip.


"The pain was so excruciating that I didn't even know I was deaf," the Herald sun quoted Barnard as saying.

Barnard has been fighting a legal battle with Qantas for more than a year, claiming she suffered severe and permanent injuries, including sudden sensio-neural hearing loss, from the child's scream.

Ear converts sound waves into electrical impulses that are transmitted to the temporal lobe of the brain through the auditory nerve. It consists of outer, inner and middle sections.
Advertisement
She sought damages for physical and mental suffering, medical expenses and loss of impairment of earning capacity.

The 67-year-old's daughter, Brian Lawler, argued Qantas was careless because the plane's cabin and cockpit crew failed "to take all the necessary precautions to prevent the accident that resulted" in the injury.

However, Qantas' US legal team has been maintaining that Barnard had hearing problem prior to her trip as well.

Qantas has reportedly referred to emails written by Barnard to a travel companion prior to the Australian trip in which she admitted wearing hearing aids.

The warring parties, however, announced last week to the judge handling the case that a truce had been reached and they "entered into a confidential settlement".

"There is a confidential settlement and we can't make any comment," said Wally Mariani of Quantas.

Noise can affect day to day functioning of individuals and can also lead to a dangerous change in the heart's functioning, scientists have revealed.
Advertisement
Advertisement