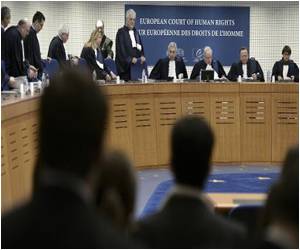 Europe's rights court backed the decision of a French court to allow a man in a vegetative state to be taken off life support, in a ruling that could become a benchmark on the continent.

The fate of Vincent Lambert, 38, who was left a quadriplegic with severe brain damage after a 2008 road accident, has torn apart his family in a judicial tug-of-war over his right to die. His parents and two siblings had appealed to the Strasbourg-based European Court of Human Rights in a desperate bid to stop doctors from withdrawing intravenous feeding after exhausting their legal options in France.

But the court voted 12 to five that a French court decision, which said Lambert should be allowed to die, did not violate European rights laws. "It is a scandal, our son has been sentenced to death," said his mother Viviane Lambert, who wiped away tears as the ruling was handed down. "We will stay by Vincent's side and keep on fighting."


The case pitted Lambert's mother against his wife who insists her husband  a former psychiatric nurse  would never have wanted to be kept alive artificially.
Advertisement
- Legal Tug-of-War -

Even though the court ruled in her favor, wife Rachel said she was "devastated" by the decision. "There is no relief or joy to express," she said, adding "we want his wishes to be fulfilled."

The legal drama began in January 2014, when Lambert's doctors, backed by his wife and six of his eight siblings, decided to stop the intravenous food and water keeping him alive in line with a 2005 passive euthanasia law in France.

His deeply devout Catholic parents, half-brother and sister won a court application to stop the plan, calling it "akin to torture".

In an appeal, the French supreme administrative court, known as the State Council, ordered three doctors to draw up a report on Lambert's condition and in June 2014 ruled that withdrawing care from a person with no hope of recovery was lawful.

Lambert's parents then took the case to Europe's rights court which ruled the State Council decision was "the object of a thorough investigation where all points of view were expressed and all aspects weighed long and hard."

Lawmaker Jean Leonetti, who drew up France's passive euthanasia law, said up to 1,700 patients were in a similar situation to Vincent Lambert in the country and urged people to make "living wills" so their medical wishes would be clear.

While the decision relating to the contentious euthanasia debate is likely to have an impact across Europe, the bitter Lambert family battle is set to continue in France.

Vincent's parents plan to seek a new medical decision as the doctor who was behind the initial decision to stop intravenous feeding is no longer employed at the medical unit where their son is being kept.

Medical experts have said Lambert is in an irreversible vegetative state.

But Viviane believes her son is showing signs of progress, including lifting his leg and swallowing, and just needs better care. His parents want him moved to a new medical facility.

Viviane's lawyer Jerome Triomphe urged the health ministry to allow the transfer of Lambert "so that those who want to take care of him can do so rather than leave him on death row at the wishes of those who want to get rid of him."

Laurent Pettiti, the lawyer for Lambert's wife, said it was difficult to imagine "how an administrative judge could go against the decision of the European Court and State Council."

In practice, once all legal avenues are exhausted, the palliative care unit where Lambert is being held will stop artificial nutrition and hydration and sedate Lambert to avoid discomfort and suffering.

In such cases it can take between a week and 10 days for the patient to die.

The "Death with Dignity" association welcomed the ECHR ruling, but deplored the fact that euthanasia was not legal in France and could allow Lambert to avoid the "inhumane procedure."

Lambert's case ignited a fierce debate around euthanasia in France where it remains illegal despite recent efforts to ease legislation dealing with the terminally ill -- a campaign promise by President Francois Hollande.

In March, lawmakers voted overwhelmingly in favor of a law allowing medics to place terminally ill patients in a deep sleep until they die.

The law also makes "living wills" -- drafted by people who do not want to be kept alive artificially if they are too ill to decide -- legally binding on doctors.

Assisted suicide is legal in Switzerland, the Netherlands, Belgium and Luxembourg as well as in the US states of Vermont, Oregon and Washington.

Chilean Teenager With Cystic Fibrosis Who Asked for Euthanasia on YouTube Passes Away
Valentina Maureira died on May 14 due to complications from the genetic disorder, which attacks the ...

France Allows 'Terminal Sedation' Until Death, not Euthanasia
The French Parliament stopped short of legalizing euthanasia but voted a law allowing medics to ......