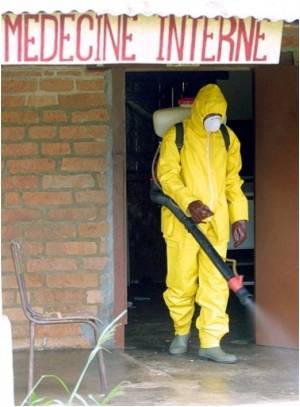 In one of the worst ever outbreaks of the Ebola virus, Guinea confirmed on Tuesday 74 people diagnosed with the deadly Ebola fever had died so far this year.

The health ministry said there had been 121 confirmed cases of Ebola - an incurable disease that can kill up to 90 percent of its victims - since January.

Four people are receiving treatment in the capital Conakry, and six in Gueckedou, in the south of the country, which has seen one of the most serious outbreaks.


But the ministry said there had been "no new cases of Ebola recorded" since Sunday.

The World Health Organization (WHO) has described west Africa's first Ebola outbreak as one of the most challenging since the virus emerged in 1976 in what is now the Democratic Republic of Congo.

There is a need for greater co-operation between governments, corporate sector and citizens to ensure international preparedness and to provide a universal safety net to deal with global health issues
Advertisement
The disease has spread to neighboring Liberia, with suspected cases reported in Mali and Sierra Leone.

Guinea's 121 confirmed cases form part of a bigger caseload of viral hemorrhagic fever in the country, although not all victims have been confirmed as having the Ebola virus.

The WHO said Friday there had been 218 cases of this type of fever in the country since January.

So far, experts have not been able to determine what those testing negative for Ebola have caught.

There is no vaccine or cure for Ebola, which can easily spread among humans through contact with infected blood, bodily fluids and tissue. The most severe strains have had a 90 percent fatality rate.

The virus can be stopped only by isolating suspected cases in ultra-clean conditions and quarantining those who have been in contact with them.

Virologists have revealed that the virus that has caused a deadly Ebola epidemic in Guinea is a new strain that emerged locally.
Advertisement
<< Programmed Smart Homes may Make Life Easier
EU to Promote Common Guidelines to Standardize Migrant Healt... >>

The outbreak of Ebola fever in West Africa came as bad news for gourmets in Ivory Coast, as it brings respite from the hunter to species sought out for tasty meat, but feared to carry the disease.
Advertisement
News A-Z
A B C D E F G H I J K L M N O P Q R S T U V W X Y Z
What's New on Medindia